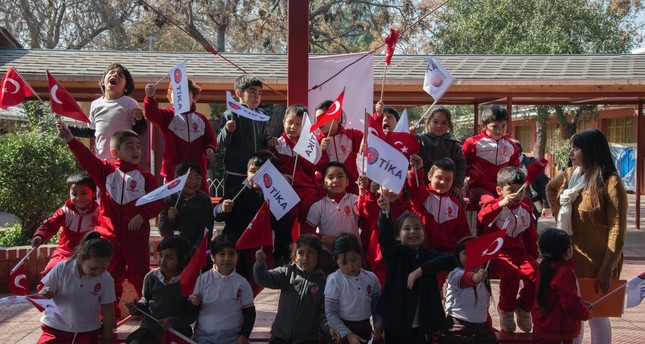 Carrying out school projects around the world - from Niger to Afghanistan and Cuba - and many other countries, the Turkish Cooperation and Coordination Agency (TİKA) has recently ramped up projects and activities in the south Latin American country of Chile, as well. One of these projects is helping young Chileans learn the Turkish language

It was in August 1924 when Mustafa Kemal Atatürk, the founding father of the 10-month-old Republic of Turkey, made a historic appeal to a union of teachers at a small local restaurant in the war-weary capital city of Ankara that would be scripted onto the walls of each and every school in Turkey for decades to come: "The new generation will be your creation."

While Atatürk's legacy now stretches far beyond the borders of his beloved Turkey, one school in a country some thousands of kilometers away champions his name more than any other school in the world.

Colegio Mustafa Kemal Atatürk in the Chilean capital city of Santiago is a school which welcomes children and their parents with Turkish and Chilean flags flying proudly along side each other in the windy, Latin American air. 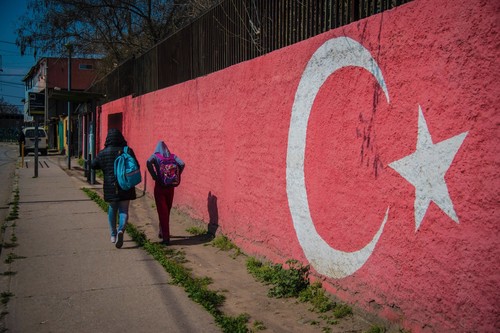 The school is not blessed enough to be in one of the fancy neighborhoods of Santiago. Here, the children do not have a basketball court, the classroom walls have long been in need of painting and much of the school equipment is just a wish waiting for a miracle from God to reach the school administration.

President Recep Tayyip Erdoğan's visit to Santiago in January 2016 led to a twist in the school's fate. His pledge to dramatically enhance the conditions of the school immediately warmed the hearts and minds of the little children at the school and the weary school administration.

Javier Vega, the school principal, was awed by the words of the Turkish president, wondering desperately why the Turkish state would rebuild the school from scratch. He had profound doubts deep inside.

Over time, Vega overcame his perplexity. The school was in jubilation mode as a delegation from the Turkish Cooperation and Coordination Agency (TİKA), along with the Turkish ambassador to Santiago Naciye Kaya, paid a visit to the college earlier this week, where a brand-new basketball court can now be seen shining in the shy winter sun, the walls are well-painted and classrooms were full of high-quality school equipment.

Vega could not hide his astonishment mixed with happiness. That being said, he still had questions. "Do you Turks always extend help like this?" The school principal asked, saying: "We have never seen anyone come and invest in helpiing a school to this extent."

TİKA has been carrying out such school projects around the world - from Niger to Afghanistan and Cuba - and many other countries across the globe. The Turkish coordination agency has recently ramped up projects and activities in the south Latin American country of Chile, as well.

One of these projects is helping young Chileans learn the Turkish language. Children at Colegio Mustafa Kemal Atatürk have been learning Turkish for the past six months. Hundreds of Chileans, who had never heard of Atatürk or a single word of the Turkish language in their lives, are now showing a growing interest in Turkish culture.

Isidora Nunez is one of them. The 10-year-old student is overjoyed to be learning a foreign language. "I love it. I just recently started getting to know about Turkish culture but I like it." Taking Turkish classes has even earned Nunez the privilege of a desired travel spot – and Istanbul is her top destination.

The classes provide more than simple Turkish lessons. Ezgi Hoşsöz, a 29-year-old Spanish-language speaker working for TİKA, is full of stories about her experience over the past six months. Stressing that the children are also taught Turkish culture and history, Hoşsöz spoke proudly of her Chilean students.

The TİKA teacher spoke about the most inspirational aspects of her time at Mustafa Kemal Atatürk College. "The children remarkably embrace Atatürk's beliefs and values as if he is one of their own. This impressed me a lot."

"The children are curious about everything. They ask a lot of questions," Hoşsöz recalled, adding that the main topics of study have been about the religious practices of Turks, more often than not. Questions such as "Why do Turks fast during Ramadan?" and "Why do the Turkish people sacrifice an animal on Eid al-Adha?" are some of the questions that students ask.

Despite the overwhelming number of questions raised regarding Islam and religious rituals in Turkey, the teacher said that she believes there is a silver lining in abolishing misunderstandings and prejudices. "I made clarifications of such issues or the students, due to the fact that Islam is widely misunderstood."

Looking back at her time in the Chilean capital as a teacher, Hoşsöz praises the country's education system and contends that the system is more learning-oriented rather than curriculum-oriented and that she is looking forward to her years ahead as a teacher.

Share on Facebook Share on Twitter
Previous in Feature The administrations of every single province in the Ottoman Empire... Next in Feature Digital services are changing the ways we read and purchase books...
DAILY SABAH RECOMMENDS