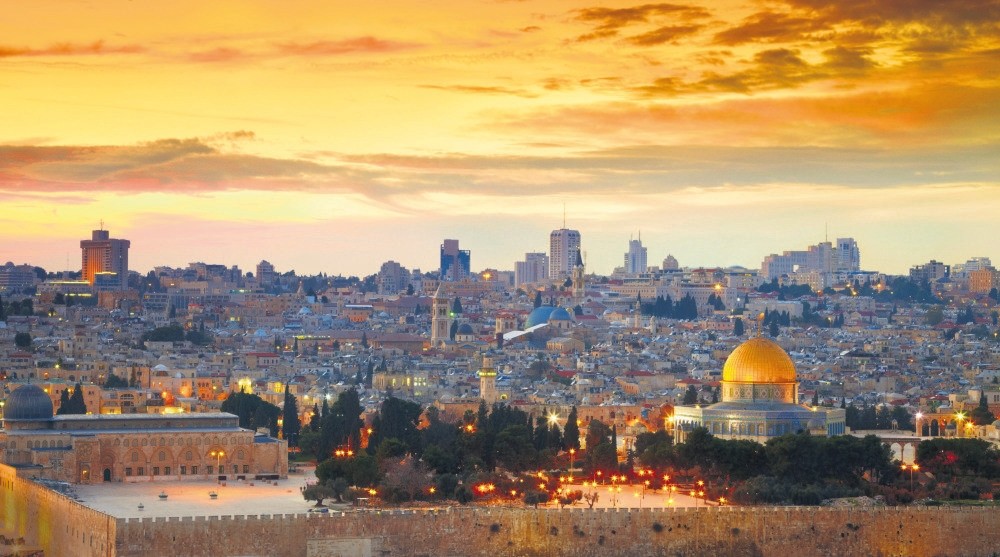 A view of Jerusalem and Al-Aqsa Mosque. The Ottoman Empire ruled over the region for centuries and left priceless architectural and cultural works which the Turkish NGO Mirasu0131mu0131z is working to save.
by Jane Louise Kandur
Jul 07, 2018 12:00 am

Waqfs, charitable foundations, are an ancient Islamic and Ottoman tradition. After facing severe challenges at the beginning of the Turkish Republic, waqfs are now strong and thriving. Today, some Turkish waqfs are active domestically, while others are active abroad; this week, one in particular, came to international attention

In the Ottoman era, waqf establishments acted as bridges between the public and the state. They took care of the people's needs that the state could not. Waqfs were active in every field of life, from culture, to education, religious training, even accommodation and providing food and water.

In the 1660s, Paul Rycaut, a British diplomat in Istanbul, wrote that not only did waqfs provide the poor with food, brought to their own homes - thus avoiding the humiliation of admitting they needed help - there were special waqfs to take care of cats and dogs. Rycaut tells us that in some cities buildings were set aside for cats; servants were employed to take care of the cats.

In addition to houses for cats, Ottoman buildings often had special accommodation included for birds. Birds would nest here and raise their young. Care was taken that the bird shelters would protect their occupants from the hot sun and from the wind.

There were also waqfs established to provide grazing areas for horses, sheep and cows. Another waqf was established to help storks. This charitable foundation provided for the needs of storks on their long journey and would take care of those that were ill or injured. The nests of storks would be protected so that the nesting couple could use the same nest over the years.

One important function of waqfs was to ensure that through their charitable actions wealth in the capital would be distributed throughout the empire. For example, a number of waqfs were established in Jerusalem, dating back to when the city came under Ottoman control. At the beginning of the century there were still 121 holy sites and places of worship that had waqfs associated with them.

Unfortunately, from the 18th century on, waqfs started to lose their influence. With the declaration of the Republic, waqfs came under the close control of the state. The waqf law passed on June 5, 1935 made some serious changes for waqfs, while a Cabinet decision in 1984 affected waqfs even more.

Knowing that waqfs were and are established to take care of people, animals and buildings in need, it was interesting that I noticed an article in the Sun Sentinel (Florida) last week. The subheading of this newspaper read Florida Jewish Journal and the heading was Turkey Renovates Muslim Neighborhoods.

No, the neighborhoods in question are in Jerusalem. Of course, Jewish and Muslim residents have always been present in Jerusalem, and with the establishment of Israel, more and more have been moving in slowly (or not so slowly) as part of their bid to have the city, one that is of importance in all three major Abrahamic traditions, be the capital of Israel.

The shock and horror at what is being done in Muslim neighborhoods is thinly disguised in the article. Apparently, Muslim homes and buildings in Muslim regions are being renovated. The blame for this "renovation of Muslim neighborhoods" is laid firmly at the door of the president of Turkey, Recep Tayyip Erdoğan. Despite the ridiculous nature of this claim, it is hardly surprising. These days the fashion seems to be to blame this democratically elected leader of Turkey as the source of all the world's problems. The paper tells us that organizations in Jerusalem are "drumming up support for Turkish policies among the Muslim public there." 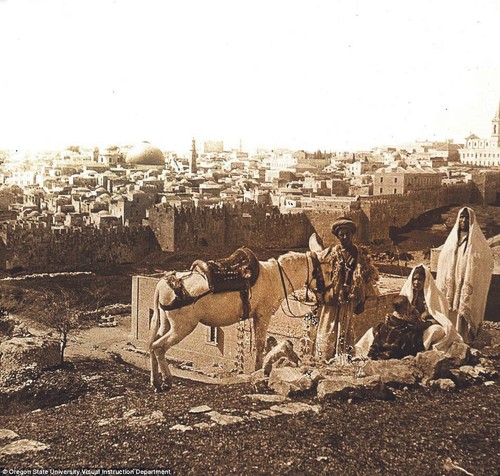 An old photo taken in Jerusalem, showing a family with their donkey, during the Ottoman reign of the city.

Such a ludicrous claim takes us back to the antediluvian arguments used by the Turkish opposition five or six years ago (and sometimes dusted off and rolled out again): The Justice and Development Party (AK Party) buys votes with packets of pasta or bags of coal. This has never been an AK Party or government policy, and the party and/or government has never sought to ensure votes with anything other than normal democratic actions. However, this accusation is something that the opposition, failing a sound argument or realistic alternative policies, trundles out in desperation from time to time.

The Sun Sentinel also accuses a Turkish waqf, Mirasımız, of carrying out heinous acts such as raising funds for Turkish visitors to go to Masjid al Aqsa, encouraging learning, raising money to help the poor and oppressed in Jerusalem and even bringing young people from Jerusalem to attend conferences in Turkey.

Anat Berko, a Likud member of the Knesset, is quoted as saying: "This is a very serious issue because it is state-sponsored subversion. ... The person masterminding the activities is Erdoğan..." Erdoğan is also accused of "Islamizing Turkey." Islamizing a country with a 95 percent Muslim population is simply gilding the lily; there is surely no point in any politician trying to transform Turkey into what it already is.

Naturally, no matter how absurd the accusations were, I was curious to see if Mirasımız had anything to say about the matter. Halis Mutlu, the press officer for the NGO, told me the following: "All the activities carried out by Mirasımız are in accordance with Israeli laws and regulations. The efforts of the waqf focus on protecting the Ottoman culture and heritage in the holy city of Jerusalem. However, these activities have upset some of the more hardline, fanatic Israelis, who are determined to see the presence of the Palestinians obliterated from the region."

Mutlu also addressed the accusation that Erdoğan is spearheading or even supporting the efforts of Mirasımız: "None of our actions are carried out against or for any particular people. The Turkish government does not give any financial support to our waqf. Mirasımız is a non-governmental organization and is independent. The Turkish state has its own organization, the Turkish Cooperation and Coordination Agency (TİKA), which carries out similar tasks, again in keeping with Israeli laws and regulations. However, once again these actions have upset those hardline Israelis who want to eliminate the Muslim presence in the city."

It is easy to find more information about Mirasımız on their website. Set up in 2008, the waqf protects and restores mosques, masjids, charitable foundations, fountains, market places and many other buildings and locations that date from the Ottoman era; while doing this, they remain aware of the environment and cooperate with any parties interested in working on the projects. The waqf also helps Palestinian residents in Jerusalem who find themselves struggling to make ends meet.

The waqf aims to record any remaining structures that date from the Ottoman period, and then bring them back to their original state. Mirasımız also cooperates with other local and international institutions on similar projects.

According to the website, there are many subversive projects being carried out by the Israelis to destroy any remnants of Ottoman heritage; the primary such project is well recognızed in the global community. The efforts of the Israelis to not only keep Muslims out of Masjid-i Aqsa, but to also destroy the building have been well documented.

There is a greater aim to all of Mirasımız activities. It is not political, nor is it focused on getting support for Turkish policies. Rather, the aim is to ensure that Turkey, and the Muslim population of Turkey, play a role in finding a solution to the human tragedy that is occurring in this region.

The tradition of Turkish waqfs is ancient. It is encouraging to see that today there are still societies and waqfs dedicated to the care of not only people and buildings, but animals as well. The fact that these waqfs are active internationally should be of no surprise, if one remembers that Turkey tops the league table in charitable exports and activities in other countries. There is an important international heritage to be protected; Turkish waqfs are heading up such efforts.

Despite all this positivity, it is very sad that such positive and altruistic activities are met with hostility and suspicion. Rather than welcoming the helping hand from Turkey, the hardliners in Israel seem to be hysterically trying to bat away the same hand. But there is an important sector of Israeli society who welcomes these efforts; more liberal Israelis and Palestinians are happy to have waqfs like Mirasımız active in the area.