Turkey cites its concerns over TTIP to Füle 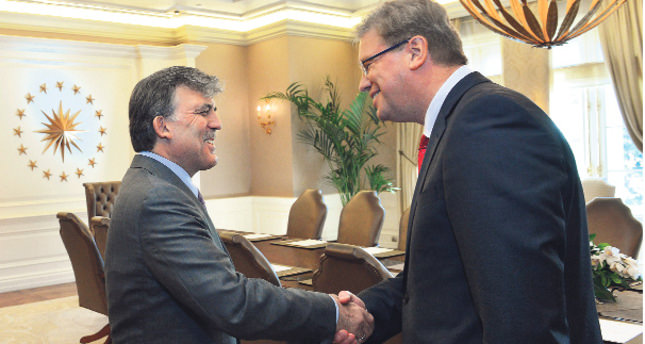 by Daily Sabah Jun 18, 2014 12:00 am
European Commissioner for Enlargement and European Neighborhood Policy Stefan Füle, who met with top Turkish officials, was told of Turkey's concern over being left out of the FTA talks between Europe and the U.S.

Turkish Minister of Economy Nihat Zeybekçi and the European Commissioner for Enlargement and European Neighborhood Policy Stefan Füle spoke over breakfast, where they discussed numerous issues, including the Transatlantic Trade and Investment Partnership Agreement (TTIP) currently being negotiated between the U.S. and EU. Speaking to the press after the breakfast, Zeybekci stated that Turkey should be involved in the negotiations between the U.S and EU.

Noting that it was a very successful meeting, at which the Customs Union and Turkey's accession to full EU membership were discussed, Zeybekçi said, "We aim for Turkey to become a full EU member. However, the membership process and the steps that need to be taken are more crucial for us."

Zeybekçi also touched on Turkey's concerns including the asymmetrical structure of the Customs Union, Turkey not being included in decision-making mechanisms and the negative impact of free trade agreements signed by EU countries and third countries along with the TTIP Agreement process. "The U.S.-EU and Turkey triangle should be completed," said Zeybekçi.

Füle further noted that he will meet with European Commissioner for Trade Karel de Gucht next week and the commission for third-party negotiations will focus on how Turkey can benefit more from free trade agreements the EU signs with non-EU countries.
Last Update: Jun 18, 2014 1:08 am
RELATED TOPICS