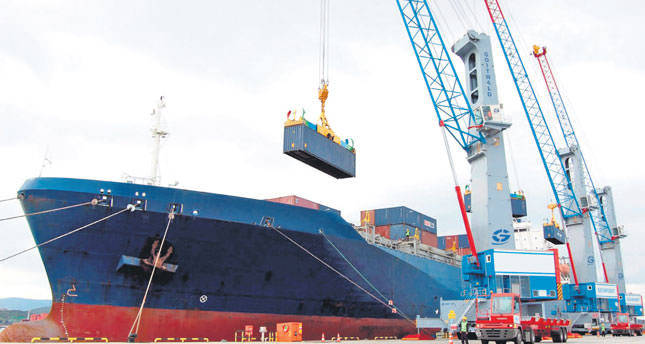 The Gaziantep Toy Museum, opened last year in the historic Antep house after its restoration, attracts the attention of adults as well as children with its toy collection consisting of about 600 works

Turkey's exports reached $12.6 billion with an increase of 6.7 percent in October compared to the same month of last year. The figure is the highest amount exported by Turkey in the month of October since the establishment of the Republic in 1923. Economy Minister Nihat Zeybekci, speaking about the figures, stated that 15 cities' exports reached over $100 million in October and noted, "48 cities succeeded in exporting over $100 million from January to October this year." In the January-October period, the top five countries that Turkey exported to were Germany, England, Iraq, Italy and the U.S.

The Turkish Exporters' Assembly (TİM) released its data on Saturday, boosting optimism that the country will cut its budget deficit. In September, Turkey's trade deficit narrowed to $6.9 billion, down from $8.4 billion for the same month in 2013. TurkStat reported this 8.4 percent decrease after a widening in August. The deficit gap had previously narrowed seven months in a row from the start of 2014.

The Turkish automotive industry led exports with a 13.6 percent total this month. This sector led exports for the last 12 months, accounting for 14.2 percent of exports. Exported automotive goods have been valued at more than $22 billion since October 2013.

Exporters performed well across the first 10 months of 2014 with an average increase of 5.6 percent; total exports stood at over $131 billion in October, compared to the same 10-month period in 2013. Germany, the EU's largest economy, continued to account for the biggest share of Turkish exports, with an increase of 11 percent in October compared with the same month last year. Turkish exports to the EU as a whole surged by 8.2 percent. The head of the Turkish Exporters' Assembly, Mehmet Büyükekşi, said on Saturday that the organization was following "signals of recession" in the EU region as the 28-nation bloc will have an important role in Turkey achieving its 2015 exporting goals.

Exports to Iraq followed a downward pattern, with a 23 percent decrease this month after the country was stunned by an offensive launched by ISIS in June this year.

Egypt, at odds with Turkey, has declared that it will not extend an agreement that allowed Turkish ships to use its harbors to transport goods across the Middle East. Nevertheless, this month Turkish exports to Egypt surged by 72 percent compared to last October. Büyükekşi said Turkey's losses from the drop in exports to Iraq are around $800 million, as the Middle Eastern country was the second-largest export destination for Turkey until the recent surge in violence.

"Concerns over a recession in the EU, soaring geopolitical risks and rate fluctuations in emerging economies due to [the United States'] Fed's expected decision are the three main reasons for the slow economic growth," said Büyükekşi.