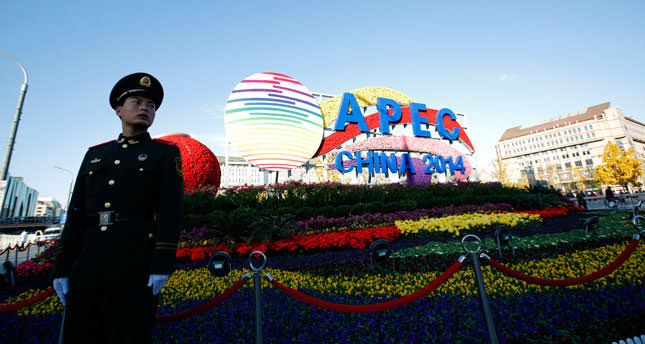 China plans to use a meeting of Asia-Pacific leaders to promote a regional trade initiative at a time when progress on a rival U.S.-led trade deal has stalled, injecting a note of rivalry into an annual summit

While Washington is promoting the Trans-Pacific Partnership in talks with 12 Asian-Pacific countries, including Japan, Canada, Australia and Mexico, which, for now, excludes China, the Asia Pacific Economic Cooperation (APEC) meeting on Monday will give China, the world's second-largest economy, a platform to assert itself as a regional leader.

The two-day meeting of 21 countries including the U.S., Japan and South Korea is the first major international gathering in China since President Xi Jinping came to power. The proposal promoted by China, the Free Trade Area of the Asia Pacific, is part of an agenda that also includes talks on cooperation in environmental protection, energy efficiency and urbanization.

China's campaign for the initiative comes as Beijing tries to claim a bigger role in U.S.-dominated global trade, security and financial structures. Last month, China and 20 other Asian nations launched a bank to pay for roads and other infrastructure despite U.S. objections that it is an unneeded rival to the World Bank. Beijing is providing most of the $50 billion in startup capital.

In May, Xi called for the creation of a new Asian structure for security cooperation based on a 24-nation group that excludes the U.S. Beijing is worried Washington is pursuing a "strategy of containment" against China and sees a China-led trade pact as a way to gain influence, said Chen Bo, a trade specialist at Shanghai University of Finance and Economics.

China is the top trading partner for most countries in the region from Australia to South Korea. Such countries want to promote commercial ties but are uneasy about Beijing's strategic ambitions, especially at a time when it is embroiled in territorial disputes with Japan in the East China Sea and with Vietnam and other Southeast Asian neighbors in the South China Sea.

The U.S. and some other countries believe China's trade initiative is at too early a stage to take up at APEC and will be a distraction, New Zealand's trade minister, Tim Groser, said. But he said the proposal is the "big, sexy, formal centerpiece" of next week's meeting.

Washington is promoting the Trans-Pacific Partnership in talks with 12 Asian-Pacific countries including Japan, Canada, Australia and Mexico. Few details have been released, but promoters say it would cut tariffs, open up trade in farm goods, strengthen protection of intellectual property and set standards for state-owned industries. For now, the talks exclude China, despite its status as the world's biggest exporter. Analysts say members of the U.S.-led agreement might favor each other's goods, hurting China if it fails to join. A Washington think tank, the Petersen Institute for International Economics, said that might cost China up to $100 billion in lost potential sales.

Meanwhile, Republicans grabbed Democratic Senate seats in North Carolina, Colorado, Iowa, West Virginia, Arkansas, Montana and South Dakota to gain control of the Senate. As a result, U.S. President Barack Obama now faces the final two years of his presidency contending with two houses of Congress that are controlled by a party that firmly opposes his policies. Obama's weakened position could undermine his ability to stand up to a rising China.

Keith Richburg, a former Washington Post foreign editor, said, "Obama will be arriving for the APEC summit in Beijing 'as a certified lame duck', while Chinese President Xi Jinping will be the APEC host bearing gifts such as a new Asian Infrastructure Investment Bank with $50 million in mostly Chinese founding capital to rival the U.S.-dominated World Bank and Asian Development Bank." But despite what is expected to be two years of political gridlock as Republicans eye seizing the White House in the 2016 election, trade could become a rare point of agreement between a Republican Congress and the White House.

Analysts said most Republicans would support Obama's TPP agenda, though the pact has received lukewarm support from Democrats, who fear that opening markets to countries with lower wages and standards will cost American jobs. Republicans tend to be more supportive, seeing more trade as benefiting the economy. "The large majority of the Republican party would support this," said Jeffrey Schott, an international-trade specialist at the Peterson Institute for International Economics.