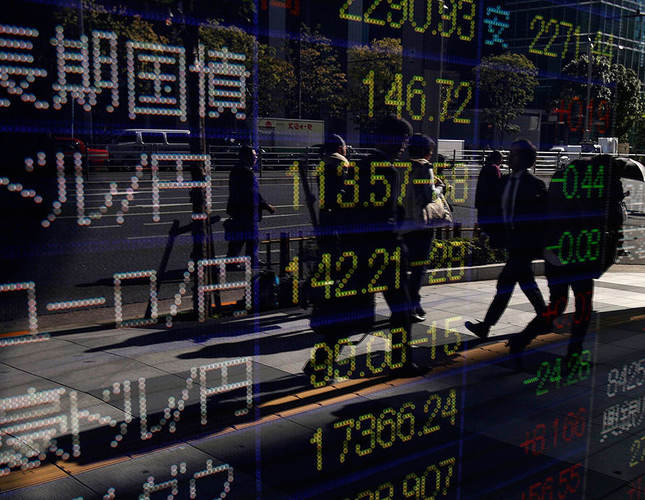 by Nov 12, 2014 12:00 am
Global regulators announced on Wednesday fines of $3.2 billion (2.5 billion euros) against five major US and European banks for attempting to manipulate foreign exchange markets.

The hefty fines, unveiled in London, Washington and Zurich, follow a worldwide probe into the scandal over the $5.3-trillion-per-day forex market, around 40 percent of which takes place in the British capital.

British banks HSBC and Royal Bank of Scotland (RBS), US peers Citigroup and JPMorgan Chase, and Swiss lender UBS have all been fined by Britain's Financial Conduct Authority (FCA) and the US Commodity Futures Trading Commission (CFTC).

Barclays - which was at the heart of the 2012 Libor rate-rigging affair - was not included in the settlements, but it added that it continued to hold talks with regulators "with the objective of bringing this to resolution in due course".

A string of scandals, including Libor rigging and product mis-selling, has damaged the reputation of major banks, which had also helped sparked the notorious 2008 global financial crisis that led to a worldwide recession.

"The Financial Conduct Authority has imposed fines totalling £1,114,918,000 on five banks for failing to control business practices in their G10 spot foreign exchange (FX) trading operations," the regulator said in a statement.

"The G10 spot FX market is a systemically important financial market. At the heart of today's action is our finding that the failings at these banks undermine confidence in the UK financial system and put its integrity at risk."

The FCA said that, between January 1, 2008 and October 15, 2013, it found that "ineffective controls" at the five banks allowed their G10 forex traders "to put their banks' interests ahead of those of their clients, other market participants and the wider UK financial system".

Traders at the different banks "formed tight knit groups in which information was shared about client activity", it added.

The British regulator said traders used code to identify clients without naming them, such as "The 3 Musketeers", "The Players" and "The A-team".

"The banks failed to manage obvious risks around confidentiality, conflicts of interest and trading conduct," the FCA said.

"These failings allowed traders at those banks to behave unacceptably. They shared information about clients' activities, which they had been trusted to keep confidential, and attempted to manipulate G10 spot FX currency rates, including in collusion with traders at other firms, in a way that could disadvantage those clients and the market."

At the same time, the CFTC announced in a separate statement that the five banks were being punished for "attempted manipulation of, and for aiding and abetting other banks' attempts to manipulate, global foreign exchange benchmark rates to benefit the positions of certain traders."

It added that Citi, HSBC, JPMorgan, RBS and UBS had "coordinated trading with other banks in private chat rooms in their attempts to manipulate" the market.

The CFTC also ordered the banks to "cease and desist from further violations, and take specified steps to implement and strengthen their internal controls and procedures ... to ensure the integrity of their participation in the fixing of foreign exchange benchmark rates and internal and external communications by traders."

News of the FCA fine was welcomed by the British government.

"Today we take tough action to clean up corruption by a few so that we have a financial system that works for everyone," said Chancellor of the Exchequer, George Osborne.

"The banks that employed them face big fines and I will ensure that these fines are used for the wider public good."

The total FCA fine is a record amount and eclipses the £532 million penalty it handed down over the Libor scandal.