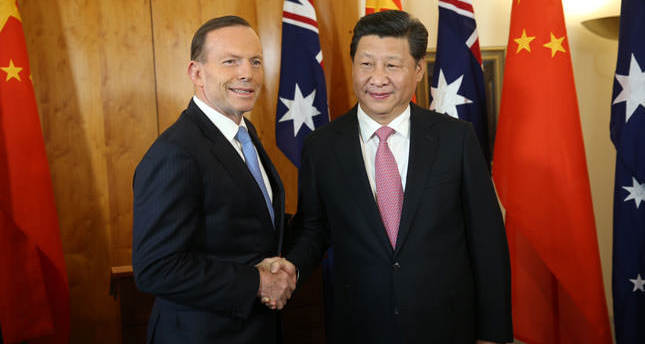 Australian Prime Minister Tony Abbott said the free trade deal agreed with China was the most comprehensive that China had concluded with any country. 95 percent of Australia’s exports to China would be tariff free

China and Australia signed a preliminary free-trade deal yesterday that would give Australia's service industry unsurpassed access to the Chinese market and Australian agriculture advantages over competitors from the United States, Canada and the European Union, officials said. Chinese President Xi Jinping witnessed the signing by Australian and Chinese officials of a declaration of intent which officially concluded negotiations that began in 2005. Xi earlier told Australia's Parliament that China was committed to peaceful development and resolution of territorial disputes. But China expected some concern about its rise because "it's like a big guy in the crowd."

"Others will naturally wonder how the big guy will move and act and be concerned that the big guy may push them around, stand in their way, or even take up their place," he said. The deal between Australia and its largest trading partner will make 85 percent of goods exports tariff-free from the outset, rising to 93 percent four years later, the Australian government said. The government did not reveal what proportion of Australian goods exports are currently tariff-free. In return, Australia will lift the threshold at which privately-owned Chinese companies can invest in non-sensitive areas without government scrutiny from 248 million Australian dollars ($218 million) to AU$1,078 million. Tariffs on Chinese manufactured goods would also be lifted.

Trade Minister Andrew Robb said the pact would be signed next year and take effect as early as March if it is endorsed by the Australian Parliament by then. Australia had "secured the best-ever market access provided to a foreign country by China on services," such as banks, universities and health care providers, he said. The removal of tariffs on Australian farm products would give Australia an advantage over U.S., Canadian and E.U. competitors while negating advantages New Zealand and Chile have enjoyed through their free-trade deals with China, he said. Sticking points in the negotiations were Chinese protection of its rice, cotton, wheat, sugar and oil seed industries and demands for less Australian government restrictions on Australian companies and assets being sold to Chinese state-owned businesses.

Robb said those were excluded from the agreement, which will be renegotiated in three years. Xi said two-way trade grew from $86 million in the early years after Australia recognized communist China in 1972 to $136 billion last year. Rob said no modeling had been done on the value of the free-trade deal. He did not know whether Australia's trade surplus with China, driven by Chinese demand for iron ore and coal, would change as a result of the deal.