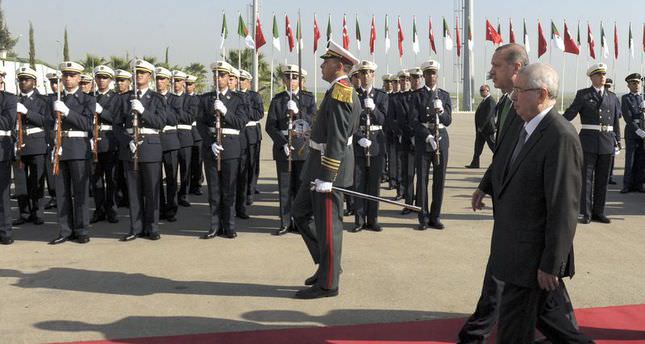 by Daily Sabah with AA
Nov 21, 2014 12:00 am
Turkey and Algeria, as two countries with coasts on the Mediterranean Sea and long historical and commercial ties, will do their utmost to further boost bilateral trade, said top officials from both countries yesterday at a business forum in Algiers.

Algerian Prime Minister Abdelmalik Sellal, speaking at the Turkish-Algerian Business Forum held during President Recep Tayyip Erdoğan's visit to the country, said Algeria could help Turkish businesses gain access to the African market, calling on industry leaders and all investors from Turkey to partner up with their Algerian counterparts.

A high number of business people from both countries attended the forum. Algerian exports, which totalled $2.6 billion in 2012 making it Turkey's 25th largest import partner, are mainly natural gas and petroleum products, while Turkey exported $1.8 billion worth of goods including mainly vehicles, iron and steel, electrical machinery and manufactured metals.

The Turkish Economy Ministry has pointed out Algeria as one of its 17 priority countries for the 2014-2015 period with which it wants to increase trade volume. The balance of trade between Algeria and Turkey edged toward Algeria's favor in 2005. Turkish exports have been increasing since 2006 with a balance of trade amounting to $1.2 billion in 2013 which moved in favor of Turkey.

Nihat Zeybekçi, the economy minister, speaking at the same forum, said Algeria could be a valued partner for business in both Africa and the wider region, proposing the start of negotiations on a free trade agreement. During the visit the two countries agreed to increase Turkey's liquefied natural gas imports from 4 billion cubic meters to 4.4 billion cubic meters. Turkish businessmen are involved in construction projects worth approximately $11 billion in Algeria according to figures provided by Turkish officials.