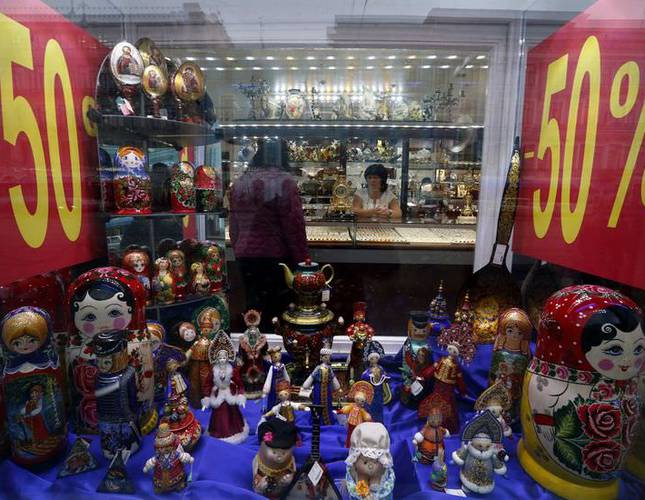 Traditional Russian matryoshka wooden dolls and other gifts on display. With sale advertisements seen behind a shop window in St. Petersburg. The lives of many Russians are beginning to change. With the rouble down and prices up, more Russians are putting off expensive purchases

With Russia's economy battered by economic sanctions and plunging oil prices, President Vladimir Putin has allowed the central bank to administer strong medicine, sharply raising interest rates even as it freed the rouble to float.

Such tough measures may well help push the country deeper into recession next year, but have so far staved off financial panic, runaway inflation or a currency meltdown like the one that helped catapult Putin into power in the 1990s. Those who follow the central bank say the hawkish moves are a result of Putin, known for closely managing Russia's machinery of power, giving the bank's technocrats free rein.

The high interest rates will hurt. The European Bank for Reconstruction and Development says recession is certain, predicting 0.2 percent contraction for the full year of 2015. Politicians have grumbled. Economy Minister Alexei Ulyukayev sent a letter to the Kremlin in the summer urging greater "cooperation" between the bank and the government, viewed as a plea for looser policy.

"There is a tension between the government and the central bank as regards growth. The effect of these stabilisation policies is going to be to deepen the recession," said Christopher Granville, managing director of London-based consultancy Trusted Sources. Putin himself has complained about high borrowing costs. But so far, he seems to trust the hawkish instincts at the bank. "What the central bank is doing is in line with what the leadership wants, in a strategic way," said Granville. "Stability is the absolute top priority, rather than avoiding negative growth at all costs."

Still, there is always a chance that Putin can change his approach. Remarks he made on Tuesday hinted as much.

Speaking to Finance Minister Anton Siluanov, he called for "teamwork between the central bank and the government".
Last Update: Nov 23, 2014 11:26 pm