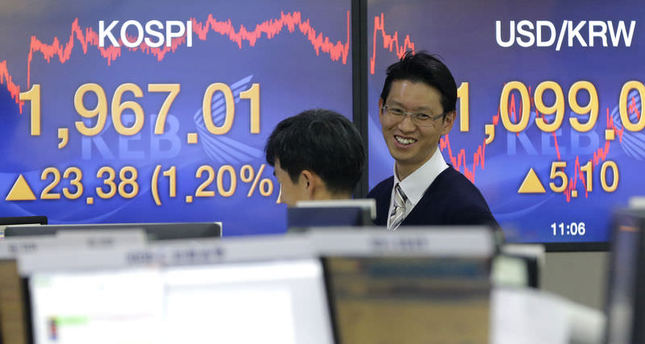 by French Press Agency - AFP
Nov 23, 2014 12:00 am
As Japan slips into recession, South Korea is keeping an increasingly wary eye on its export rival's free-falling currency, which is honing a lasting competitive edge over Korean products in a number of key markets.

The massive fiscal stimulus and flood of easy money unleashed by "Abenomics" has sent the Japanese yen plunging to multi-year lows against a basket of major currencies.

In the past two years, the yen has lost around 33 percent of its value against the U.S. dollar and 35 percent against the Korean won - a depreciation that has triggered public expressions of concern in Seoul from industrialists, politicians and monetary policy-setters.

A weaker yen makes Japanese exports cheaper, which impacts countries such as South Korea that are direct competitors in a number of key sectors.

Bank of Korea (BOK) Governor Lee Ju-Yeol promised earlier this month that it would not "sit idle" despite the limited tools it can deploy to counter the falling yen. At its monthly monetary meeting on Nov. 18, the BOK kept its key interest rate unchanged at 2.0 percent, but Lee underlined the "worrisome situation" regarding the Japanese currency. If Japanese companies up the ante still further by slashing export prices, then South Korean companies in the auto, steel, machinery and shipbuilding sectors are "bound to suffer," Lee said.