The Dollar continues to rise, as Euro and Gold suffer sharp falls after US unemployment is announced 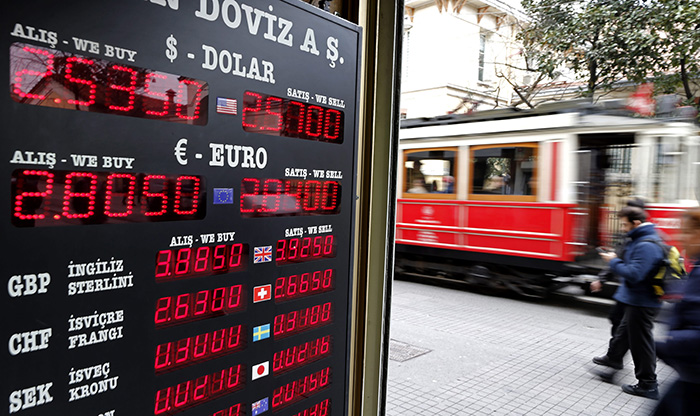 by Daily Sabah with Reuters Mar 06, 2015 12:00 am
The dollar rose to an 11-year high against the world's major currencies and U.S. bond yields jumped on Friday, as U.S. job figures reinforced expectations that the Federal Reserve will push ahead with its first rate hike in almost a decade.

Payroll data showed U.S. companies added 295,000 jobs in February, well above forecasts, to give an increase of 240,000. It was the longest run of 200,000-plus increases since 1994. The unemployment rate dropped to a lower-than-expected 5.5 percent from 5.7 percent in January.

The dollar surged after the report. The euro tumbled below $1.09 and the yen weakened to more than 120 yen to the dollar. In addition gold prices also suffered a sharp decrease with the dollar gaining strength in global markets.

The Turkish lira slipped to a new record low against the U.S. dollar early on Friday morning on the back of a strong U.S. dollar index and uncertainty over the Central Bank of Turkey's rate policy.

Starting the day from 2.61, Turkish lira sank to 2.63 in the afternoon, scoring a new record low against the dollar, despite a decline to 5.57 in the early afternoon.

Meanwhile, answering questions on Turkish television NTV, Turkey's Deputy Prime Minister Bülent Arınç said "There should not be intereference to Central Bank at this point and it is not right to threaten them," regarding current debates over the Central Bank's rate policy.

"The President should just provide guidelines, his words can be misinterpreted. The Western mentality is concerned about the debate" he added.
Last Update: Mar 06, 2015 5:24 pm
RELATED TOPICS