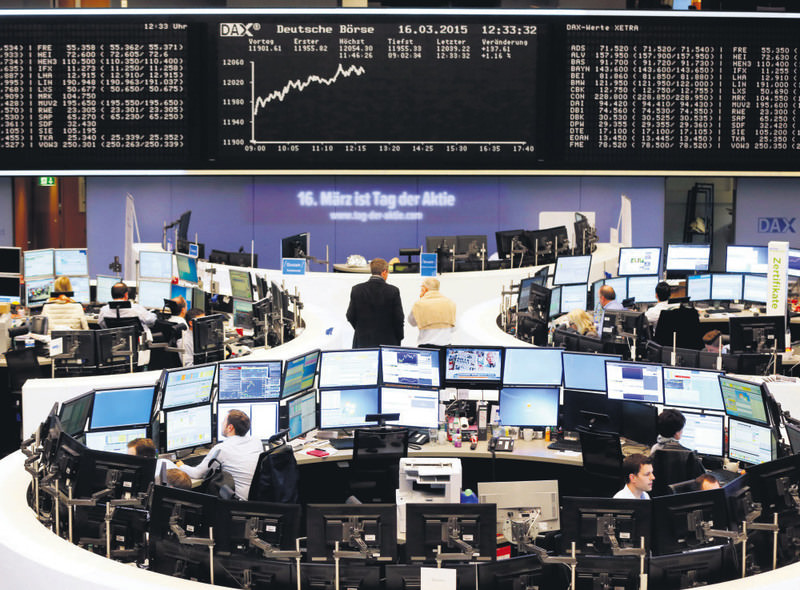 German stocks powered above 12,000 points for the first time, while the main pan-eurozone benchmark indices hit new seven-year highs. The euro rebounded as European trading got underway, however, while U.S. oil prices recovered after slipping to a fresh six-year low, although they were still down on the day. This week's focal point for global financial markets is the U.S. Federal Reserve's policy decision on Wednesday, with the euro/dollar exchange rate likely to remain the dominant driver for major equity, currency and bond markets until then. "With dollar momentum this strong and investors unlikely to ride any euro rally ahead of the (Fed) meeting, risks for the euro are still to the downside for the next couple of days and any bounces are likely to be limited," Unicredit FX analysts said on Monday.

In early European trading the euro was up 1/3 of a percent against the dollar at $1.0530, having slid to $1.0457 early in the Asian session, its lowest since January 2003. The euro has lost roughly a quarter of its value versus the dollar since mid-2014 and suffered its biggest weekly fall since September 2011 last week, shedding 3.2 percent as the European Central Bank launched its trillion euro money-printing scheme.

Recent weak U.S. inflation and retail sales data have not derailed expectations that the Fed will tighten monetary policy, and the prospects that higher rates and a stronger dollar will hit U.S. corporate profits have dragged on shares. Wall Street futures were seen opening 0.2 percent higher on Monday, lagging Europe's main bourses. Many observers expect the Fed to remove its pledge to remain "patient" on delivering its first interest rate hike since 2006, with economists polled by Reuters almost evenly split on whether a first hike will come in June or later in the year.

German 10-year Bund yields inched up 1 basis point to 0.265 percent, having hit a record-low 0.188 percent last week. Longer-dated German yields fell, however, and benchmark Spanish, Italian and Portuguese yields were also headed back towards their recent record lows. The ECB is expected to buy more sovereign bonds as part of its stimulus programme this week, limiting any upward pressure on bond yields. "The current dynamic is incredible, logical and extendable ... until something changes, but there is little sign of that right now," Citi rates strategist Mark Schofield said. Oil prices continued to tumble, with U.S. crude dropping more than 2 percent at one point to a six-year low on fears of oversupply. The International Energy Agency said on Friday that a global glut of oil is growing and U.S. production shows no sign of slowing. U.S. crude was last down about 0.8 percent at $44.48 a barrel, while Brent was 0.6 percent lower at $54.32. After snapping its longest daily losing streak since 1973 on Friday with a first rise in 10 sessions, gold consolidated its gains. Bullion was flat on the day at $1,158 an ounce.