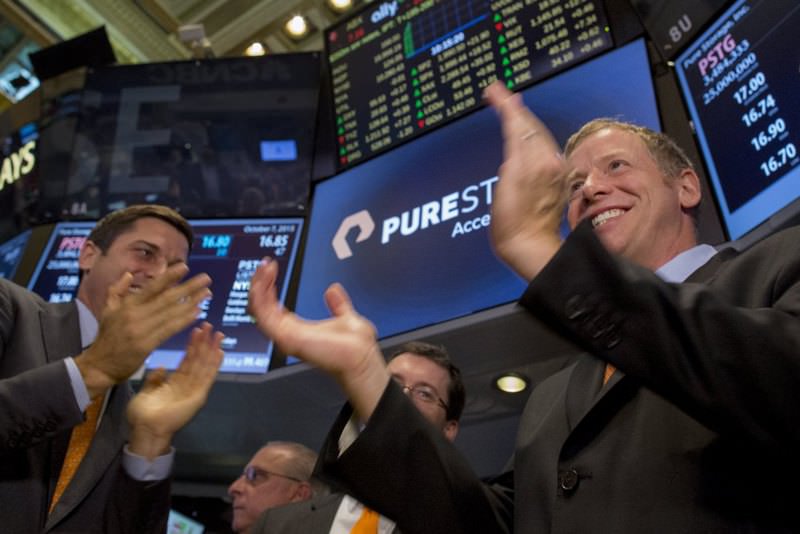 Five of the 12 tech companies that went public this year priced their shares at a valuation below or nearly the same as their private market value, compared to 24 percent of the 29 that went public in 2014

Last year, many tech IPOs enjoyed soaring valuations in their Wall Street debut, raining cash on the companies and their investors and boosting concerns about another Silicon Valley bubble. Now, the party is winding down, according to data analyzed by Reuters: Five of the 12 U.S.-based tech companies that went public this year, or 42 percent, priced their shares at a valuation below or nearly the same as their private market value, compared to 24 percent of the 29 that went public in 2014.

"People are no longer out of their minds with valuations and expectations," said Adam Marcus, managing partner at OpenView Venture Partners in Boston. A recent example is Pure Storage, whose IPO earlier this month gave the data storage company a $3.1 billion market cap that almost matched its valuation in the private market.

The shift in the investing climate comes as payments company Square filed this week for its own IPO later this year, becoming one of the most prominent of the so-called "unicorns," or private companies valued at more than $1 billion, to try to go public.

Even when valuations increase, they are growing by a smaller amount, according to the data, which was provided by Ipreo, a market intelligence company, and Pitchbook, a venture capital, private equity and M&A data provider, and analyzed by Reuters. Among the companies that saw their values grow in an IPO in 2014, the median increase from their value in the private market was 61 percent. Some companies saw increases of three-, four- and even five-fold. So far this year, that gain is 32 percent.

The data excludes eight companies that went public in 2014 because there was insufficient information to calculate their pre-IPO valuations. The shrinking difference affects every corner of the pre-IPO market, compelling some companies to delay or withdraw their public-offering plans, bankers and industry analysts said. And some late-stage investors - while they will still get paid - may see smaller returns than they gambled on. Those who invested in rounds with an eye on a 30 or 40 percent return will more likely get a return similar to the S&P 500 over the past year - about 8 percent, sources said.

According to interviews with bankers, venture capitalists and late-stage investors, this shift in the venture investing climate is just getting underway and likely to accelerate. It is also an about-face from the last few years, when hot tech companies found no shortage of investors for their private financing and experienced massive valuations, and then demanded an even higher market cap in an IPO. But now the public market is less willing to play along, venture capitalists said. To be sure, some delays in going public can be attributed to the surge in funding from late stage investors, allowing tech startups to stay private longer. As their valuations grew in the private market, a big increase in the value of their shares in an IPO became harder to achieve. A valuation drop in an IPO doesn't necessarily dim the long-term prospects of a company. Hortonworks' stock is up more than 34 percent from the IPO price, for instance, after its valuation took a 40 percent cut in its public offering last year. But lower valuations in the public market raise questions about the future of the nearly 150 companies that have filed confidential IPOs, according to estimates by some investors. There is not enough market demand, they say, to support so many deals. In a confidential IPO, reserved for companies with less than $1 billion in revenue, companies file a draft registration with the Securities and Exchange Commission that is for non-public review.

And some "unicorn" tech companies that were expected to go public this year have put those plans off. Among them are online lending company Prosper Marketplace and data storage company Nutanix, according to sources familiar with those companies. After meeting with bankers, Prosper decided to stay private for about the next year, the sources said.

One of Prosper's public counterparts, online business lender OnDeck, saw its valuation fall from $1.3 billion during its IPO to about $624 million, according to Thomson Reuters data, likely contributing to Prosper's decision, bankers told Reuters. Nutanix is also in a holding pattern, bankers told Reuters, although Nutanix investor Ravi Mhatre of Lightspeed Venture Partners said it "is fully capable of being a public company and operating as a public company."

Neither company has filed publicly for an IPO. Regardless, many companies will go public in current market conditions, as those that have raised large rounds since 2013 are under pressure to return cash to their investors and employees in the next year. Square is among those. It filed for a public offering this week, proposing to raise at $275 million. But it, too, is expected to take a price cut. With its CEO, Jack Dorsey, now also leading Twitter, some investors expect the company's $6 billion valuation will be discounted to compensate for Dorsey's half-time role.