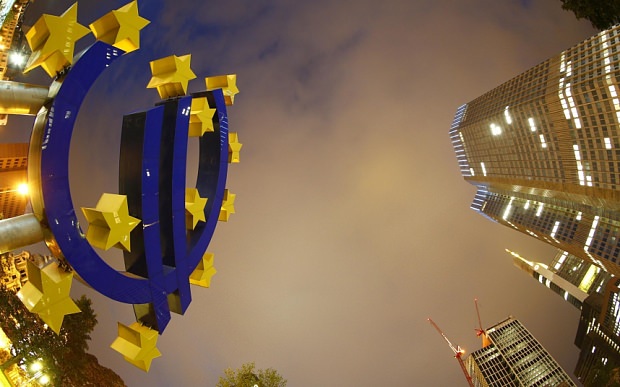 The euro sign landmark is seen at the headquarters of the European Central Bank. (REUTERS Photo)
by Daily Sabah with Reuters Dec 03, 2015 12:00 am
U.S. and European equity markets slumped on Thursday and the euro enjoyed its biggest one-day percentage rise since March 2009 on investor disappointment over the European Central Bank's latest policy easing measures.

The dollar index, which measures the greenback against a basket of major currencies, was down about 2 percent in afternoon trading in its biggest one-day percentage decline since March 2009.

The ECB cut its deposit rate by the minimum 0.1 percentage point most traders had expected, to -0.3 percent, and extended its asset purchase programme but did not increase the amount of government bonds it buys each month.

Oil futures jumped on speculation ahead of an OPEC meeting on Friday. Stocks on Wall Street had initially risen at the open, but then sharply fell as trading progressed.

The euro surged 3 percent against the dollar, while government bond yields rose. Speculators as of last week had amassed the largest short position in the euro since May in anticipation of more ECB stimulus. Shorter term two-year German bonds had their sharpest gain since 2011. [GVD/EUR]

"Markets are still trying to digest the implications of the ECB disappointing market expectations," said Steven Englander, head of G10 foreign exchange strategy at Citi in New York. "The market is taking the message that the ECB will be less willing to ease down the road as well."

The news also pushed up yields on U.S. Treasuries along with rising European yields. The yield on the 2-year note rose to 0.99 percent, its highest since April 2010. U.S. benchmark 10-year Treasury notes were last down 1-13/32 in price to yield 2.336 percent, up from a yield of 2.180 percent on Wednesday.

The ECB news overshadowed Federal Reserve chief Janet Yellen's suggestion on Thursday that the central bank would raise interest rates for the first time in a decade at the Fed's policy meeting later this month.

Gold was up 0.9 percent, rebounding from a more 6 year low earlier in the session.

Crude futures surged, lifted by the weaker dollar and a report sourced to a senior OPEC delegate that Saudi Arabia would next year propose a deal to balance oil markets with non-OPEC help. But oil-producing countries looked unlikely to reach a deal to lift languishing prices at an OPEC meeting on Friday after Iran, Iraq and Russia swiftly rejected a surprise proposal that appeared to have been floated by Saudi Arabia.