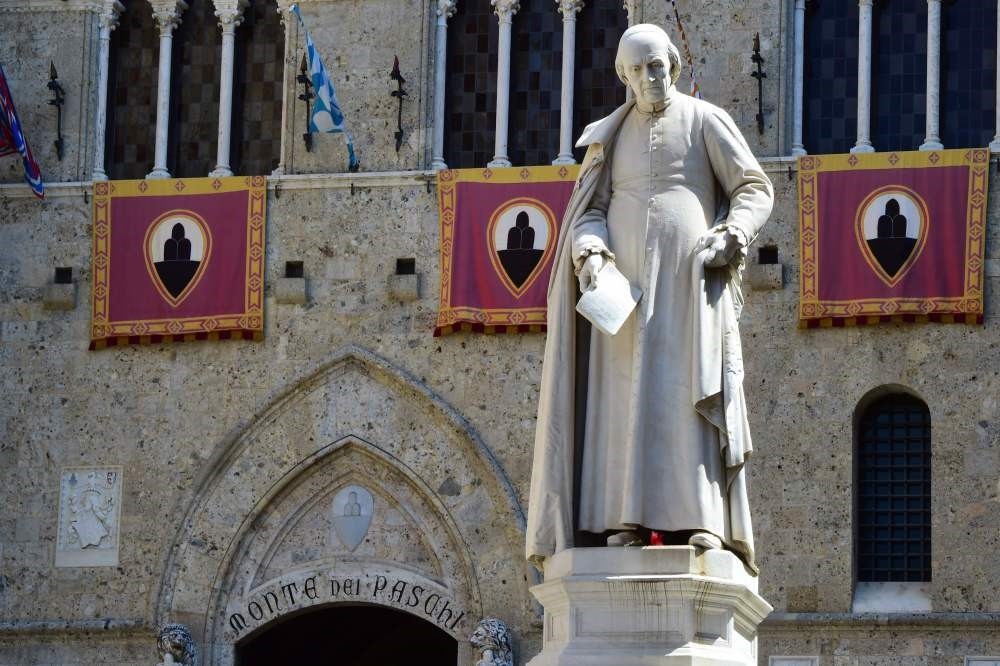 The statue of priest Sallustio Bandini at Piazza Salimbeni stands at the headquarters of the Monte dei Paschi di Siena bank in Tuscany.
by Dec 13, 2016 12:00 am

Monte dei Paschi bank will try to raise $5.3 billion from investors by year end as it races to avoid a state rescue.The bank said it would stick to the recovery plan, which includes issuing new shares

The BMPS's stock tumbled Friday over reports that the European Central Bank had denied it more time to raise the cash it needed to avoid being wound down, triggering speculation it would be forced to seek a government bailout. The bank - seen as the weak link in Italy's economy - had asked to be given until Jan. 20 to avoid collapse. The request was reportedly refused, with the ECB's board believed to have ruled that two weeks of extra time would be of little use in turning around the historic bank.

In a statement published late Sunday after a board meeting in Milan, the BMPS said it had "decided to go ahead" with plans to seek a market-led rescue by Dec. 31. The bank had initially announced its plan to seek a private sector-led rescue in July.

The bank, whose stock has fallen more than 80 percent this year, plans the sale of 27.6 billion euros ($29 billion) in non-performing loans. It also aims for a capital injection of up to five billion euros. The BMPS has already collected more than a billion euros by converting bonds into shares - but it still has another 4 billion to go before it is in the clear. According to reports in the Italian press, up to 2 billion euros could be raised by allowing private investors to convert bonds into shares. Though it remains unclear whether the bank's plan will actually work, the BMPS appeared Sunday to have avoided the worst-case scenario.

The BMPS's prospects appeared more favourable Sunday, particularly after Gentiloni was named prime minister. Renzi's foreign minister, Gentiloni, 62, was asked to form a new centre-left government that will guide Italy to elections due by February 2018. However opposition parties demanded an immediate vote, claiming Renzi would continue to pull the strings from behind the scenes.

Meanwhile Italian media said the ECB is seeking to open an investigation into the information leak that saw reports published on its refusal of the BMPS's request for more time - even though the bank's decision was not yet final, and had not been officially communicated. Italy's political crisis has added to deep worries about the failure of the country's banking sector - which features no fewer than 700 banks - to make meaningful progress towards consolidation. Non-performing loans on their books amount to a combined 360 billion euros, roughly a third of the eurozone's total bad debt.
Last Update: Dec 13, 2016 1:55 am
RELATED TOPICS