Deutsche Bank calls for patience after $1.5B loss 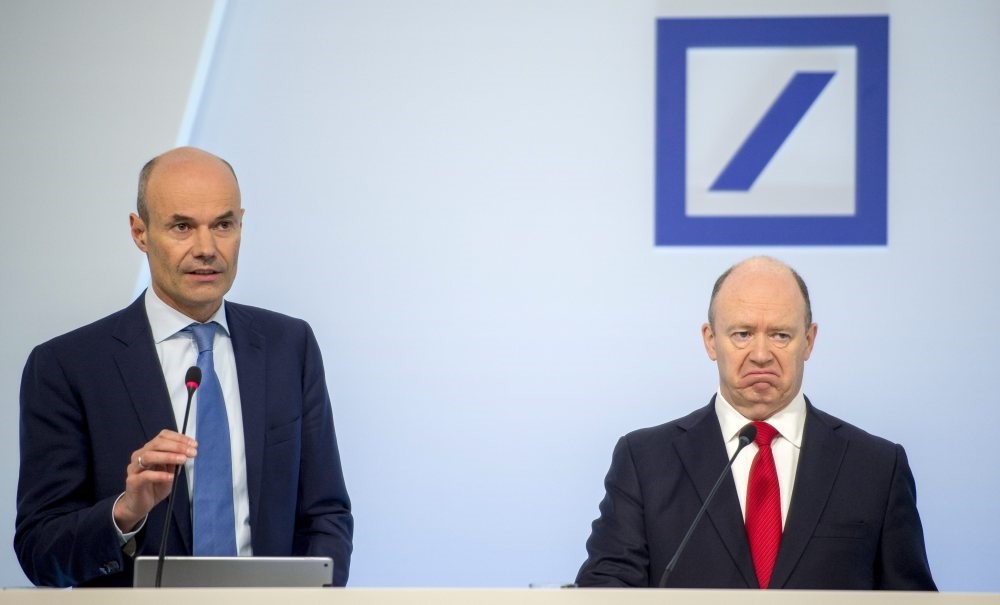 Deutsche Bank CFO Marcus Schenck (L) speaks next to CEO John Cryan (R) during the annual press conference in Frankfurt yesterday. The bank reported a net loss of 1.9 billion euros for the fourth quarter of 2016 plus the second consecutive loss for a
by Feb 03, 2017 12:00 am
Troubled German banking giant Deutsche Bank asked for patience on Thursday after reporting its second annual net loss in a row, saying it was laying the foundations for durable success in the future. "The year 2016 was not a bad year," chief executive John Cryan insisted at a press conference in Frankfurt. "We made huge progress."

"2016 was a year of small steps. But there were many of those small steps, even if most of them haven't yet shown up in the results," the CEO added, referring to the massive restructuring launched shortly after he took the helm in summer 2015.

Deutsche reported a net loss of 1.4 billion euros ($1.5 billion) for the year, struggling with the impact of mammoth fines, lower revenues and restructuring costs. Like its rivals, Deutsche continues to face headwinds from low interest rates as well as increased regulation and higher capital requirements introduced in the wake of the financial crisis. But the lender was also battered by a fresh series of fines in 2016 that took deep bites out of its result. The result is worse than the 200 million euro loss forecast by analysts FactSet, but an improvement on the nearly seven-billion-euro loss recorded in 2015. Looking beyond the net result, Deutsche saw revenues shrink by 10 percent in 2016 compared with the previous year, at just over 30 billion euros. Meanwhile, the bank's underlying, or operating result before interest and taxes was 810 million euros in the red.

Deutsche's result also continued to be burdened by provisions the bank has set aside to cover credit risks, which grew 45 percent compared with 2015 to almost 1.4 billion euros. Among other risks, Deutsche is exposed to the struggling shipping sector, which has been floundering since the 2008 financial crisis.

The fourth quarter alone saw a loss of 1.9 billion euros, affected largely by $7.2 billion the bank agreed to pay in fines and compensation in the U.S. over its involvement in the mortgage-backed securities crisis of 2008. Combined with several smaller legal settlements, the penalty accounted for a 1.6-billion-euro weight on Deutsche's net result.

Adding to its woes, on Tuesday the bank was hit with yet another penalty as New York and British authorities slapped it with fines of nearly $630 million over alleged money laundering in Russia. But with those looming threats dispelled, even at heavy cost, the bank believes it can look to the future. "Of course we aren't happy with the results" in 2016, finance director Marcus Schenck told the press conference. "We have to sow today if we want a good harvest later. And that requires patience."

Deutsche pointed to an increase in its capital cushion, required by regulators to see the bank through financial shocks, progress in closing branches and the final winding down of some 128 billion euros of risky assets it held in 2012. Cryan's tough restructuring plan will see Deutsche shed 200 branches in Germany and some 9,000 of its roughly 100,000 full-time employees.

The bank's legal woes "didn't just cost money, but also weighed on our reputation and our image," Cryan told journalists Thursday. As part of his efforts to restore shine to Germany's largest bank, Deutsche announced in January that it would slash bonuses for some 25 percent of employees, largely in upper management.

Despite its difficulties, "most of our clients maintained their confidence in Deutsche Bank," and since the fine over the mortgage crisis case was agreed "clients who had held off are once again doing much more business with us," Cryan said. He expects Deutsche to return to profitability in 2017 on the back of increased revenues and a wider economic upturn.

The bank recently recruited 350 staff in its compliance and financial crime divisions and plans 600 more hires this year. But Deutsche will continue to face legal tripwires in the months ahead, as it remains tangled in almost 8,000 legal cases worldwide.
Last Update: Feb 03, 2017 1:14 am
RELATED TOPICS