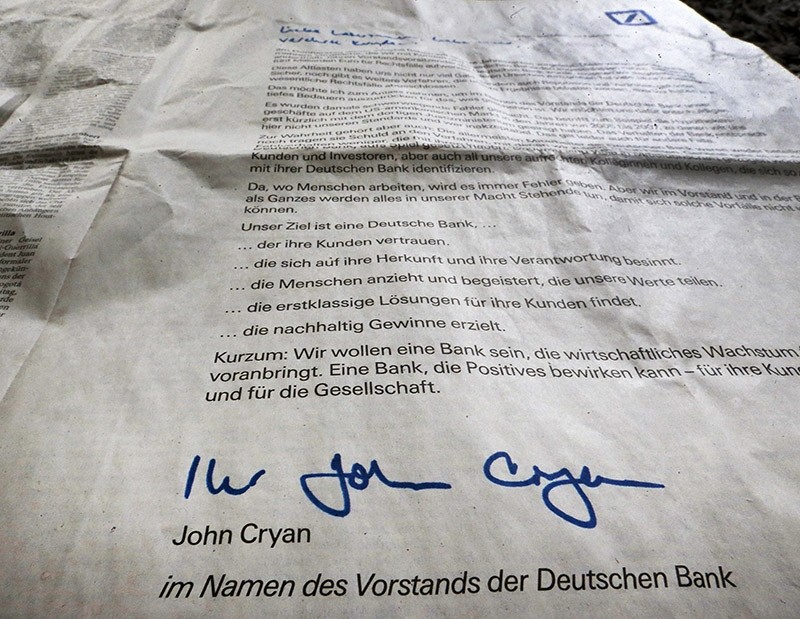 An apology for the bank's misbehaviours signed by the CEO of Deutsche Bank John Cryan is published as a newspaper ad in a big German paper in Frankfurt, Germany, Saturday, Feb. 4, 2017. (AP Photo)
by Associated Press Feb 04, 2017 12:00 am

Deutsche Bank has apologized in full-page newspaper ads for misconduct that has cost the company billions.

The ad, signed by CEO John Cryan, ran Saturday in German newspapers including the Frankfurter Allgemeine Zeitung and the Munich-based Sueddeutsche Zeitung. The bank said its past conduct "not only cost us money, but also our reputation and trust."

In December, Deutsche Bank agreed to a $7.2 billion settlement with the U.S. Justice Department over dealings in opaque bonds based on home loans in 2005-2007. Losses on such bonds helped start the global financial crisis.

The ad said "we in the management committee and bank leadership as a whole will do everything in our power to keep such cases from happening again."