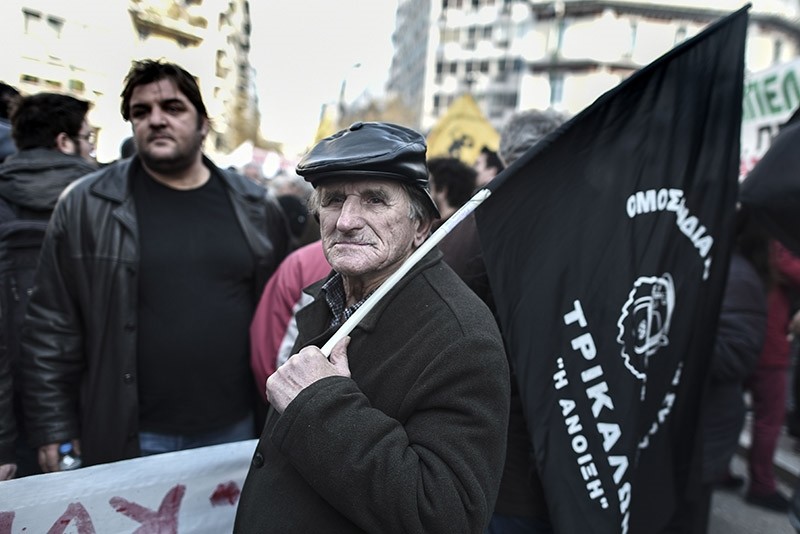 A Greek farmer holds a flag during a protest against new tax hikes and pension reforms that are part of Greece's austerity programme during an anti-austerity demonstration on February 14, 2017 in central Athens. (AFP Photo)
by Feb 17, 2017 12:00 am

Greece cannot cut pensions any further, as the International Monetary Fund is demanding, Greece's labor minister said on Friday, drawing a red line days before euro zone finance ministers assess the country's progress in meeting the terms of its bailout.

The review has been beset by delays and disputes between Greece and its European Union and IMF creditors. As disagreement has arisen over Greece's fiscal targets, further debt relief and reforms prescribed under its third bailout program, fears have grown that Europe could face a new financial crisis.

"We cannot accept IMF insistence on further cuts in pensions," Labor Minister Effie Achtsioglou said in a letter published in the Financial Times, rejecting "claims that the retirement age is too low and pensions too high."

"As minister for pensions I must answer, hoping that IMF managing director Christine Lagarde will listen."

Crisis-stricken Greece has cut pensions 11 times since 2010, when it signed up to its first bailout program with the EU and the IMF. Most Greek households depend on the country's 2.7 million pensioners to make ends meet, according to surveys.

Successive pension reforms prescribed by the lenders have failed to overhaul a system that helped to bring about the country's worst financial crisis in decades.

Greece's lagging progress in its reforms is now overshadowed by a rift between Berlin and the IMF. They disagree over the size of projected fiscal surpluses in and after 2018, when the third bailout, worth up to 86 billion euros, ends.

The IMF, which has not decided whether it will participate financially in the Greek bailout, says Athens cannot meet the EU's target for a primary surplus of 3.5 percent of gross domestic product in 2018 unless it adopts more austerity.

That does not amount to a demand for greater austerity, the IMF says. It wants the Greek target cut to 1.5 percent of GDP and the country granted significant debt relief.

Eurozone officials said last week that the lenders would ask Greece to adopt measures to broaden the tax base and cut back pensions, which together would be worth 2 percent of GDP, or 3.6 billion euros.

In her letter, Achtsioglou said lenders' statistics that put state contributions for pensions at 11 percent of GDP compared with a Eurozone average of 2.25 percent were "crude" and "misleading", pointing at a significant drop in economic output during the crisis and a jump in unemployment.

"Insisting on further pension cuts while Greek pensioners barely have enough to live on is definitely not the way to address public discontent," she said.