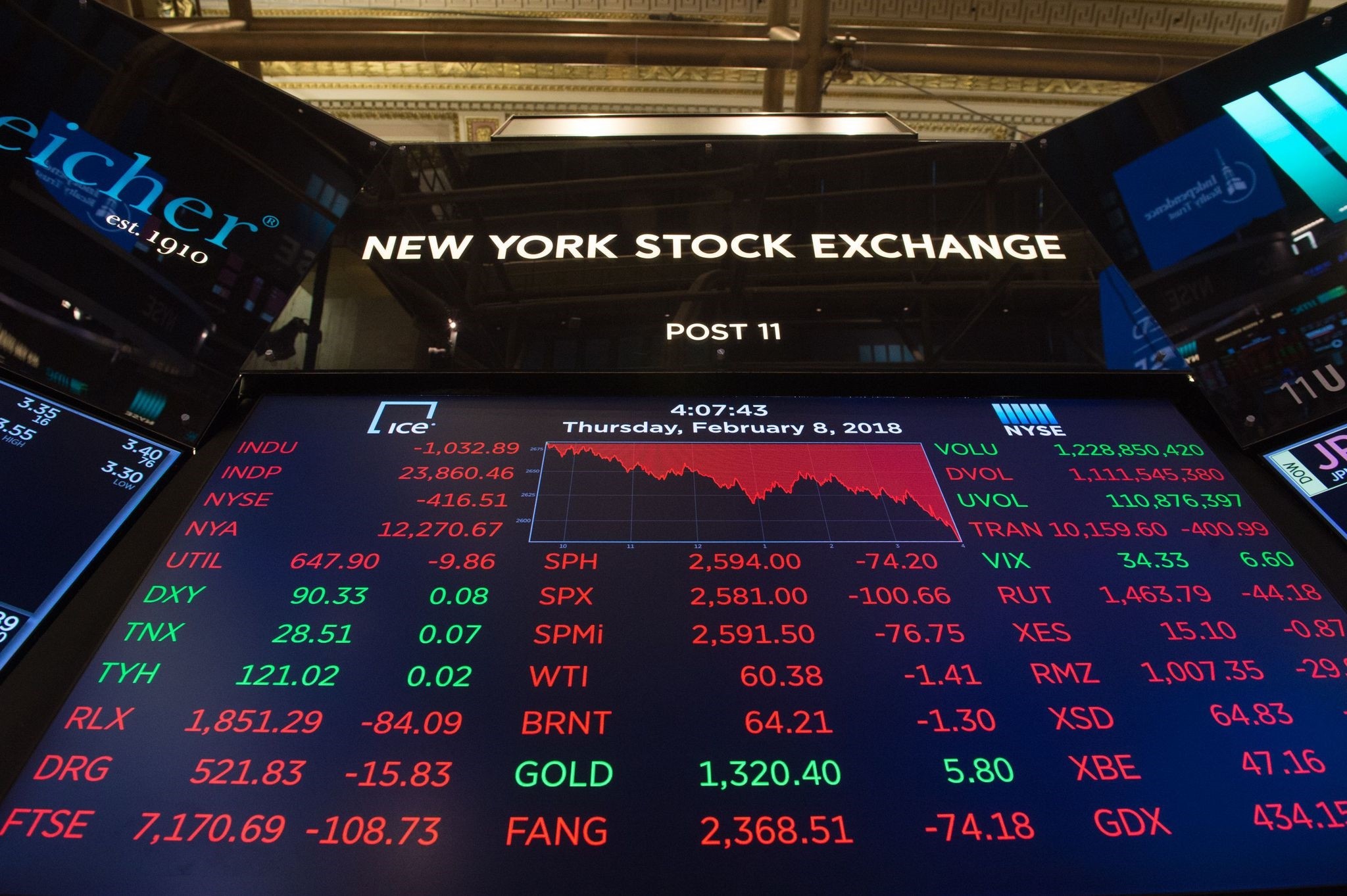 The closing numbers are displayed after the closing bell of the Dow Industrial Average at the New York Stock Exchange on Wall Street on February 8, 2018 in New York. (AFP Photo)
by Daily Sabah with AP Feb 10, 2018 12:00 am

In the wake of the largest-ever point drop for the Dow Jones on Monday, which erased all gains made in 2018, and a subsequent week-long global stock meltdown, analysts say that trillions of dollars have been wiped from the stock market, capping the worst crash on Wall Street since 2008.

World stock markets nosedived until Friday before recording minor gains, having seen nearly $5 trillion wiped off from what just two weeks ago had been record highs. Just to put that amount in perspective, investors lost around $500 billion in stock market wealth in the Black Monday market crash on Oct. 19, 1987, which would only amount to about $1.1 trillion today.

The sharp falls of the week such as the slumps the Dow Jones and S&P 500 experienced on Monday, confirmed the market was in a correction.

The big point swings that pummeled stocks reflected a return of volatility after an unprecedented period of calm. Until this week, the market had not endured a 5 percent drop since January 2016.

"There's a fair amount of volatility in the market, and our belief is the volatility is leaving investors riddled with stress and uncertainty, which is likely to continue," said Terry Sandven, chief equity strategist at U.S. Bank Wealth Management.

The swiftness of the market's slide into a correction, or a drop of at least 10 percent from a recent peak, was unparalleled. The Standard & Poor's 500 index, the benchmark for many index funds, took only nine days to fall 10 percent from its all-time high on Jan. 26.

For a while Friday, it was anybody's guess whether the week-long sell-off would ease or worsen. Stocks struggled to stabilize much of the day as investors sent prices climbing, then slumping in unsteady trading a day after the market entered its first correction in two years.

The Dow Jones briefly sank 500 points after surging more than 349 points earlier in the day and then swung to a 330-point gain in the final hour of trading. The blue chip average suffered its second 1,000-point drop in a week on Thursday.

At one point, the market was on pace for its worst weekly decline since October 2008, at the height of the financial crisis.

"History does show that, even though we haven't seen this quick of a movement from a peak to correction mode, what we do know is the swifter the way down, the sooner the market will bottom and start moving up," Bell said.

The three indexes finished the week down more than 5 percent. They're also now all in the red for the year.

Technology companies accounted for most of the broad gains, outweighing losses in energy stocks, which slumped as U.S. crude prices declined. The price of oil fell below $60 a barrel for the first time this year.

U.S. stocks started to tumble last week after the Labor Department said workers' wages grew at a fast rate in January. Investors worried that rising wages will hurt corporate profits and could signal an increase in inflation that could prompt the Federal Reserve to raise interest rates at a faster pace, putting a brake on the economy.

Also contributing to the big swings this week was the blow-up of exchange-traded products that were built to profit if markets remained calm. Once volatility spiked, it led to huge losses for the investments, which may have exacerbated the market's swings. Other automated trading programs, which sell stocks when volatility rises, may have also contributed, among others.

The market, currently in its second-longest bull run of all time, had not seen a correction for two years, an unusually long time. Many market watchers have been predicting a pullback, saying stock prices have become too expensive relative to company earnings.

Not only are corrections common during bull markets, they're seen as entirely normal and even healthy. They allow markets to remove speculative froth after a big run-up and allow investors to buy stocks at more reasonable prices.

Analysts warned that stocks had become too expensive. As of Jan. 26, the S&P 500 traded at 18.6 times its expected earnings — a popular measure of stocks' value — compared with a median level of 15.2 since 2000. The measure dropped to 16.4 as of Thursday, meaning stocks were less expensive but still not cheap.

The prospect of ballooning deficits also stoked jitters among investors this week after Congress agreed to a $400 billion budget deal just weeks after voting to slash taxes.

Rising deficits could drive interest rates higher. That's because growing deficits force the U.S. Treasury to issue more bonds, and investors are likely to demand higher rates before buying them.

The central bank may have to more aggressively raise short-term rates to offset the economic stimulus from higher government spending and lower taxes, which also unnerves investors.

The economy is already running hot, with the nation's unemployment rate at a 17-year low of 4.1 percent. The extra stimulus threatens to send inflation higher.

Even so, Wall Street analysts note that the outlook for corporate America and the broader global economy remains positive. Major economies around the world are growing in tandem for the first time since the Great Recession, and corporate profits are on the rise. The housing industry is solid, and manufacturing is rebounding.

"By many metrics, the earnings picture looks good, and higher earnings provide the basis for valuation support and, I think, still higher stock prices if you look toward the end of the year," Sandven said.

The turbulence in U.S. stock indexes followed a broad slide in global markets.