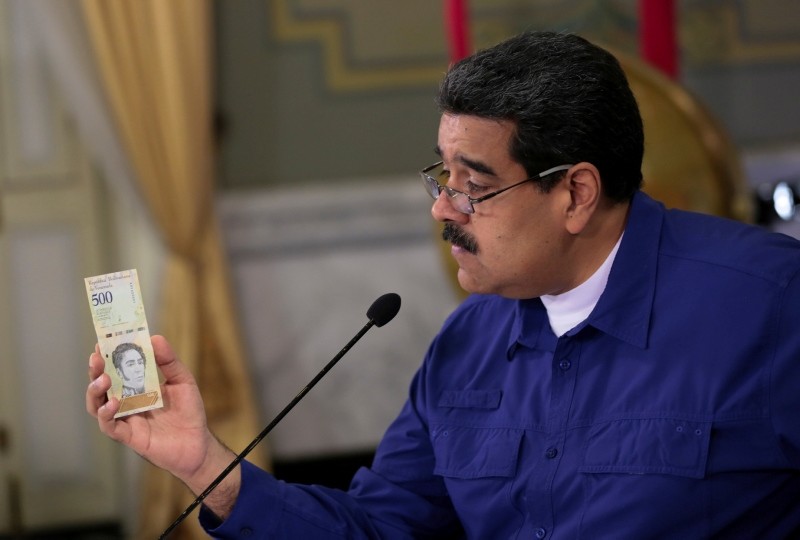 Venezuela's President Nicolas Maduro holds a bank note of the new currency Bolivar Soberano (Sovereign Bolivar) as he speaks during a meeting with ministers at Miraflores Palace in Caracas, Venezuela July 25, 2018. (Miraflores Palace via Reuters)
by Compiled from Wire Services Jul 26, 2018 12:00 am

Venezuela will remove five zeroes from the bolivar currency rather than the three zeroes originally planned, President Nicolas Maduro said on Wednesday, in an effort to keep up with inflation projected to reach 1 million percent this year.

The OPEC nation's economy has been steadily collapsing since the 2014 crash of oil prices left it unable to maintain its socialist economic system that for years provided lavish subsidies while enforcing strict price controls.

The announcement came two days after the International Monetary Fund warned that Venezuela's inflation could top 1 million percent this year, putting it on par with the crises of Zimbabwe in the 2000s and Germany in the 1920s. IMF added that Venezuela's economic fall was among the world's deepest in six decades.

Annual inflation in June topped 46,000 percent, according to the opposition-run Congress.

Maduro said the monetary conversion will spark "great revolutionary changes in the economy, which Venezuela demands," showing new bills that are to be released next month.

He said the overhaul would tie the bolivar to the recently launched state-backed cryptocurrency called the petro, without offering details.

Cryptocurrency experts have said the petro suffers from a lack of credibility because of a lack of confidence in Maduro's government and the mismanagement of the country's existing national currency.

Venezuela sits atop the world's largest proven oil reserves, but it is five years into an economic crisis with shortages of food and medicine that is driving mass migration. Venezuela's minimum wage is now about the equivalent of $1 a month.

Paper money is hard to get in Venezuela, where the largest bill today is the 100,000-bolivar note, equal to less than 1 cent on the commonly used black market exchange rate. A simple lunch easily costs 3 million bolivars.

The new paper bills will have denominations ranging from 2 up to 500. The lowest represents the buying power of 200,000 current bolivars, the highest stands in for 50 million.

Printing new money is a move Venezuela has taken before to combat soaring inflation that requires more and more bolivars to make a purchase. In 2008, then President Hugo Chavez issued new currency that eliminated three zeros.

In March, Maduro announced that Venezuela would print money with three fewer zeros, but postponed the measure at the request of banking industry leaders who said the financial system was not ready for the measure, and inflation continued to soar.

On Wednesday, Maduro spoke on national TV to his economic team, also vowing a renewed focus on Venezuela's failing oil sector, but providing no details for improving crude production.

The government has said it is the victim of an "economic war" led by opposition leaders with the help of Washington, which last year levied several rounds of sanctions against Maduro's administration and a group of top officials.

Maduro on Wednesday proposed an overhaul to the currency crimes law in order to improve the flow of foreign investments.

Economists routinely identify the exchange controls as a major hindrance to economic growth. The issue will be taken up by the country's all-powerful Constituent Assembly, Maduro said.

He also said he was transferring a concession bloc of the vast Orinoco heavy oil belt to the central bank, which he said would help shore up the bank's international reserves.