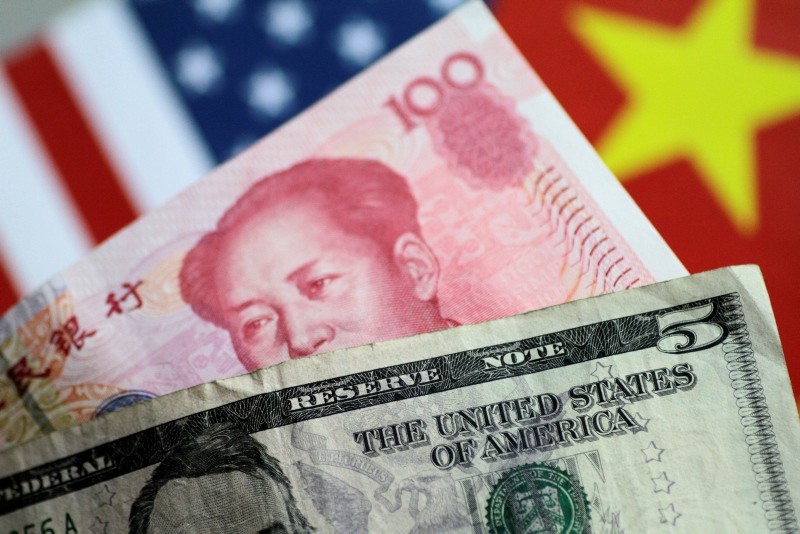 The dollar sank on Wednesday to its lowest since October, with gains led by the euro and sterling, as risk appetite improved on optimism over U.S.-China trade negotiations, prompting investors to reduce their safe-haven bets.

After initially slipping following poor German and French economic data, the euro recovered to post its highest in about three months.

News that China and the United States had extended trade talks in Beijing for an unscheduled third day boosted oil prices and broader sentiment. Expectations of more easing in China helped the mood as well, with Asian and European shares rallying.

"As long as you don't see a situation where there is a negative turn much like what we saw over the last quarter, markets will probably view any trade development, even if they're not concluded by the March 1 deadline, with modest optimism just because it reduces the downside risk to the outlook," said Mazen Issa, senior FX strategist, at TD Securities in New York.

In mid-morning trading, the dollar index fell 0.6 percent to 95.341 .DXY, after sliding to a three-month trough.

Europe's single currency briefly gave up gains after disappointing trade data out of Germany and a fall in consumer confidence in France.

The Australian dollar, a barometer of sentiment toward China, was up 0.7 percent at US$0.7190 AUD=. The Aussie has bounced off near-decade lows below $0.68 reached earlier this month.

The rally in riskier assets has accelerated since last Friday when Federal Reserve Chairman Jerome Powell said he was aware of risks to the economy and would be patient and flexible in policy decisions.

That eased concern the Fed would be raising rates as the U.S. economy weakened.

"The FOMC (Federal Open Market Committee) minutes today, and Jay Powell's speech tomorrow, will give us an update of Fed thinking and of how much the other FOMC members are in agreement with the Chairman. If the message is still one of willingness to pause, and sensitivity to markets, the dollar won't get any help," said Kit Juckes, Societe Generale's currency strategist.