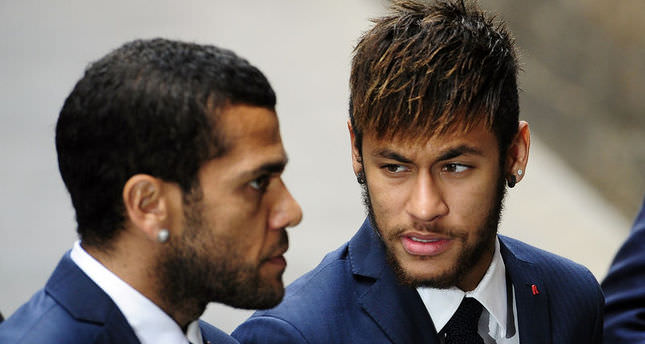 by Anadolu Agency Apr 30, 2014 12:00 am
MADRID — Barcelona, a host of fellow players and even the Italian prime minister have backed Daniel Alves after he produced a clever response to a racist taunt involving a banana when taking a corner during Sunday's La Liga game at Villarreal.

Alves, who has previously taken a stand against racism at matches in Spain, grabbed the banana thrown in front of him on to the pitch, quickly peeled it and took a bite before tossing away the skin and completing the kick.

"We are all monkeys, we are all the same, say no to racism," Alves' Barcelona and Brazil teammate Neymar wrote on his Twitter feed with a picture of him holding a peeled banana, one of a number of high-profile players who expressed their support in a similar fashion.

Italian Prime Minister Matteo Renzi even got in on the act, pointedly munching a banana along with Italy coach Cesare Prandelli to show their backing for Alves.

Barcelona earlier pledged its "complete support and solidarity" with the player and referred to "insults he was subject to from a section of the crowd".

They also thanked Villarreal for immediately condemning those responsible.

"Barcelona accepts that the perpetrators of these insults are in no way connected to Villarreal and we value very positively the support the club offered to our player," Barcelona said.

European soccer has long been blighted by racist incidents involving fans and their leagues criticized for not doing enough to stamp them out.

UEFA has been running a high-profile campaign to try to counter racist behavior and promote respect.