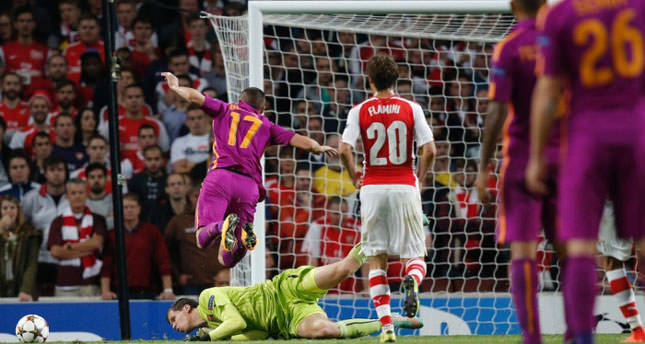 by Kenny Laurie Oct 03, 2014 12:00 am
Beleaguered Galatasaray boss Cesare Prandelli said he only had himself to blame for his team's sorry showing in their 4-1 Champions League loss to 10-man Arsenal on Wednesday night.

Cimbom may have enjoyed their finest club moment against Arsenal 14 years ago, but that memory was far from the mind as Danny Welbeck netted a hat-trick to sink Gala and seriously jeopardize their potential progression into the knockout phase.

A change of tactics over the weekend had seen a new and improved Galatasaray after moving playmaker Wesley Sneijder into a deep midfield position and pushing destroyer Felipe Melo into a ball-playing defensive role. Effective they may have been against Eskişehirspor on the weekend. But they were no match for a rampant Arsenal.

"We wanted to put quality and aggression in that position, therefore I opted to field Felipe Melo as a center-back," Prandelli said.

"I take all the responsibility for this. We're trying to settle into a new system.

"It is all my responsibility. It wasn't a great performance. Unfortunately the defenders played a bit wider than I expected and Melo had to play one against one.

"We will find a system the players believe in. Sometimes the messages I give might not go through to the team, but I believe we have very good players and we should be able to show our qualities.

"Our first-half performance was negative. In the second half, there was a little tactical change and we started to play with more width. Thus, they felt comfortable. We'll gradually decide on our ideal formation."

Indeed Galatasaray were noticeably better in the second half, but by that time Arsenal had already put them to bed.

Arsenal had 10 men for the last half an hour after Wojciech Szczesny brought down Burak Yılmaz in the penalty area. The striker dusted himself off to score the penalty. But the score was 4-1 by that stage.

England striker Welbeck was the star turn of the evening with the former Manchester United man netting the first hat trick of his professional career. The striker was, in fact, so giddy after the performance he forgot to take the match ball as a souvenir.

"I forgot the match ball," Welbeck said, with a smile. "My last hat-trick was probably for Manchester United reserves. The manager has shown a lot of faith in me and I'm delighted to repay him tonight. He has given me a chance to play football up front, in my preferred position and I'm going to do everything I can to make sure he is happy.

"The third goal was probably the hardest because I was stretching for it. I've been in that position a few times, trying to chip the keeper. Sometimes it goes in, sometimes it doesn't. We've set the benchmark with this result and we have to build on it."

Welbeck's performance in the first hour of the game was a true tour-de-force.

His first came after Alexis Sanchez's perfectly weighted pass reached the Englishman in the penalty area after 22 minutes. Fernando Muslera was quick off his line but Welbeck poked the ball through his legs.

The third came four minutes before the half with Gala's game quickly unravelling. Mesut Özil was given far too much space to play in Sanchez, who curled round the keeper.

Alex Oxlade-Chamberlain played in Welbeck for his hat trick early in the second half before Gala's solitary goal.

It wasn't just on the pitch where Galatasaray failed to cover themselves in glory. Off the pitch, Galatasaray's travelling fans threw flares on to the pitch in the 36th minute and their enclosure was guarded by riot police with attack dogs at full-time. There were also flares thrown at a nearby underground station.

The Metropolitan police made six arrests and UEFA said that it would review the match delegate's report before making a decision over what action - if any - to take.