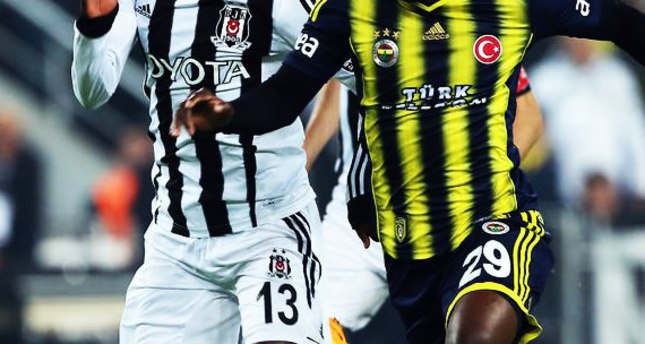 by daily sabah
Nov 01, 2014 12:00 am
The Spor Toto Super League's eighth week sees another meeting of two of the leagues powerhouses, Fenerbahçe and Beşiktaş, on Sunday. The two Istanbul archrivals will meet at the Ataturk Olympic Stadium in a clash of city rivals that will be playing against each other for the 338th match time since their first meeting back on Nov. 28, 1924. The first match resulted in 4-0 victory for Fenerbahçe 90 years ago. In total, Fenerbahçe have, marginally, had the better of the derby, winning 126 times to Beşiktaş's 123 times. The other 88 matches ended in a draw. Fenerbahçe average over a goal a game in the derby, scoring 461 goals against Beşiktaş. The Balck Eagles have responded with 427 goals. In the last 10 matches, Beşiktaş have only managed three victories against Fenerbahçe while Fener have won four times. Beşiktaş' Turkish winger Gökhan Töre - who was sent off last week - will be suspended for the game while Fenerbahçe will be without their Portuguese center-back Bruno Alves who is still suspended after picking up a straight card in the derby against Galatasaray two weeks ago. Both players are ineligible for the game.

Before the match, Beşiktaş's Senegalese forward Demba Ba spoke to Turkish media, saying "We saw the light at the end of the tunnel on the road to championship title. My life here in Turkey is going quite well. There is an excellent life here." Comparing the Turkish league with the German, English and French leagues, Ba said, "The Turkish league reminds me of the English Premier league. Because the phisycal clashes in the matches are at the highest level. Moreover, the players' technical capacities are enormous and at a high level." On the city clash at the weekend, Ba said, "The derby match is very important but I think it won't affect the fate of the league. Because it only the eighth match of the league season. There are a lot of matches ahead of us still to be played. Whatever the result will be, we are in a good position. But we are aware that this match is very important for Beşiktaş fans and we will do our best to win." On Beşiktaş head coach, Ba said, "Slaven Bilic's characteristic features completely comply with me. He is very open to communication. He has a great passion for football. He always wants to win." Ba also mentioned his favorite places in Istanbul are Sultanahmet and the Bosphorus, saying he has performed prayers in Sultanahmet with his family.