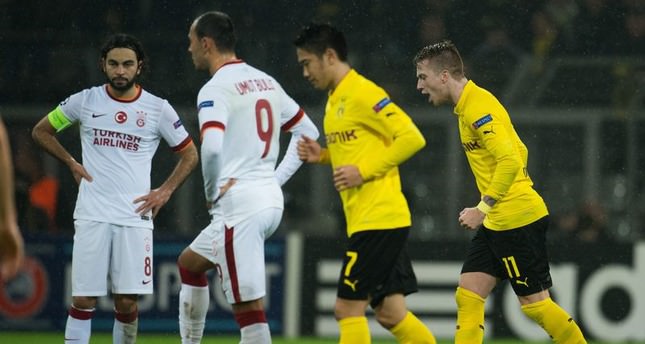 by Associated Press
Nov 05, 2014 12:00 am
Ciro Immobile scored three minutes after coming on as a substitute to help give Borussia Dortmund a 4-1 victory over Galatasaray on Tuesday and a spot in the Champions League knockout stage.

Marco Reus put Dortmund ahead in the 39th and defender Sokratis Papastathopoulos doubled the lead in the 56th.

Hakan Balta pulled one back for Galatasaray in the 70th, the first goal Dortmund has conceded in four group-stage games. But Immobile then scored his third Champions League goal in the 74th, before Semih Kaya deflected a shot by Immobile into his own net for the final score in 85th.

Galatasaray fans set off firecrackers, smoke bombs and flares, interrupting the match briefly twice. Some flares landed in the section of Dortmund fans and the match was close to being abandoned.

There were disturbances after the final whistle as well. One Turkish fan ran onto the field but was hugged by Dortmund's Ilkay Gundogan, himself of Turkish roots, and escorted off the pitch. Gundogan gave the fan his shirt.

"It was incredible. We took all the security steps but it still happened," Klopp said, referring to the incidents.

As for the game, Klopp said his team played a "fantastic match."

"We defended very well and we executed our plan very well," Klopp said.