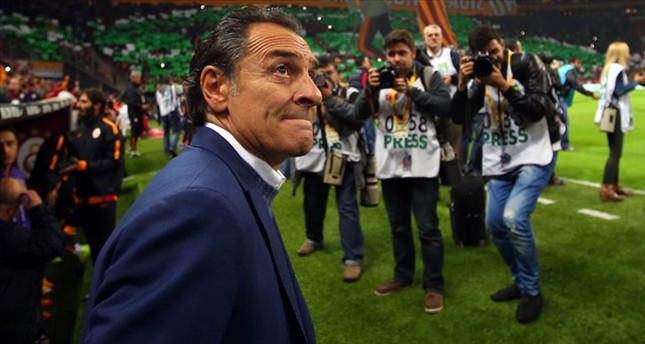 by Daily Sabah with Agencies
Nov 06, 2014 12:00 am
Galatasaray again suffered a humiliating defeat at the hands of Borussia Dortmund in the Champions League, losing 4-1, as fans began to direct their ire at Italian coach Cesare Prandelli. The Istanbul side have now conceded an embarrassing 13 goals in their last four games after conceding four goals in games against Dortmund, twice, and Başakşehir.

Tuesday's humbling in Dortmund only further increased the embarrassment for a club that has prided itself on its European exploits after the club won the UEFA Cup and Super Cup during the 1999-2000 season and became the first Turkish club to reach to the Champions League semi-finals in 1988-89.

What's worse for Galatasaray is that Dortmund, normally one of the best clubs in Europe, have been in horrible form this season, currently in the relegation spots in the Bundesliga.

Under-pressure Italian coach Cesare Prandelli claimed after the game that he was still proud of his player despite the one-sided result.

"We did our best. We tried everything for the victory," said the Italian. "We held our head high after the match. We made mistakes but we must determine where we made our mistakes. So, we have to work more. We could not do more. Our main target will be the Turkish domestic league."

Prandelli's continued insistence on the domestic league as the No1 priority only further enraged Gala fans. Gathering in front of Gala's training facilities, the fans shouted, "Resign Prandelli." As for the match, despite being down in the relegation zone in the Bundesliga, Borussia Dortmund are perfect in the Champions League and have advanced to the knockout stage with two matches to spare. Ciro Immobile scored three minutes after coming on as a substitute to help Dortmund to a 4-1 victory over Galatasaray, their fourth straight win the tournament. Marco Reus put Dortmund ahead in the 39th minute and defender Sokratis Papastathopoulos doubled the lead in the 56th. Hakan Balta pulled one back for Galatasaray in the 70th, the first goal Dortmund have conceded in the group stage. But Immobile then scored his third Champions League goal in the 74th minute, before Semih Kaya deflected a shot by Immobile into his own net in 85th. Galatasaray fans set off firecrackers, smoke bombs and flares, briefly interrupting the match twice. Some flares landed in a section of Dortmund fans and the match was close to being abandoned. There were disturbances after the final whistle, too. One Galatasaray fan ran onto the field but was hugged by Dortmund's İlkay Gündoğan, himself of Turkish roots, and escorted off the pitch. Gündoğan gave the fan his shirt. Dortmund coach Juergen Klopp said the behavior of the visiting fans was "pure provocation."

"It was incredible. We took all the security steps but it still happened," Klopp said. As for the game, Klopp said his team played a "fantastic match."

"We defended very well and we executed our plan very well," Klopp said. "I was never worried."

Dortmund lead Group D with 12 points and are five ahead of Arsenal, who drew3-3 with Anderlecht. Dortmund have qualified for the second round with two matches to spare. Dortmund won the title in 1997 and were runners-up in 2013. Meanwhile, Galatasaray's former Bayern Munich and Schalke midfielder Hamit Altıntop said they had come up well short of their pre-match expectations. "Sadly, we lost the game because of individual mistakes," said the 31-year-old. "We knew that Dortmund had the talent and skill in attack. Dortmund didn't play that well, but we built them up.

"I contributed my part to the defeat," he added having failed to prevent the Immobile goal despite a desperate tackle.

Meanwhile, Galatasaray faces further sanctions from UEFA after fans again set off firecrackers, smoke bombs and flares, briefly interrupting the match twice. According to DPA, after the massive disturbances during Tuesday's Champions League match between Borussia Dortmund and Galatasaray, German prosecutors said yesterday that an investigation had been launched. Potential charges included attempted manslaughter, breach of the peace and violations of the explosives act, said prosecutor Sandra Muecke.

In the other matches of the night, Real Madrid beat an under-strength Liverpool 1-0 to advance in the Champions League on Tuesday although Cristiano Ronaldo failed to equal the competition scoring record. Juventus earned a thrilling 3-2 win against Olympiakos, fighting back to score twice in a minute midway through the second half, to stay in contention in Group A. Atletico Madrid won 2-0 at Malmo and still leads the group. Group C leader Bayer Leverkusen won 2-1 at Zenit St. Petersburg, and Benfica avoided potential elimination by beating Monaco 1-0.