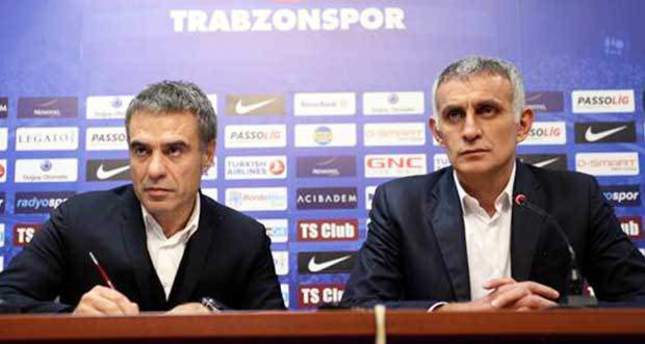 by daily sabah
Nov 13, 2014 12:00 am
Fenerbahçe's former head coach Ersun Yanal signed a contract with Trabzonspor yesterday to take over the club's head coaching position. Trabzonspor parted ways with Bosnian coach Vahid Halilhodzic last weekend after the club's poor start to the season. Yanal had previously worked with Trabzonspor between 2007-2009. Born in 1961 in İzmir, Yanal played football for Sarayköyspor, Nazillispor and Aydınspor during a largely uneventful playing career. His managerial career started in Sarayköyspor in 1990. Under Yanal's managership, Ankaragücü enjoyed a pair of successful seasons, coming sixth in the 2000-01 season and fourth in the 2001-02 season. He reached the fourth round of the UEFA cup with Gençlerbirliği before being knocked out by eventual champions Valencia 2-1 on aggregate after extra-time in the second leg. He also twice lost the final of the Turkish Cup to Trabzonspor in 2003 and 2004. In April 2004 he was appointed as head coach of the Turkish national team. His job was to secure qualification for the 2006 World Cup but despite being on route to achieving this goal, sitting in second place in the qualifying group, he was dismissed in June 2005 to be replaced by Fatih Terim. He was appointed the General Director of the Turkish Football Federation in 2010. In 2013, Yanal agreed to take charge of Fenerbahçe. On April 27 2014, Yanal's Fenerbahçe team won the Süper Lig title with three games to spare. On May 21 2014, Yanal extended his contract with Fenerbahçe by two years. However, on Aug. 9, 2014 he resigned from Fenerbahçe after a personal conflict with Chairman Aziz Yıldırım.