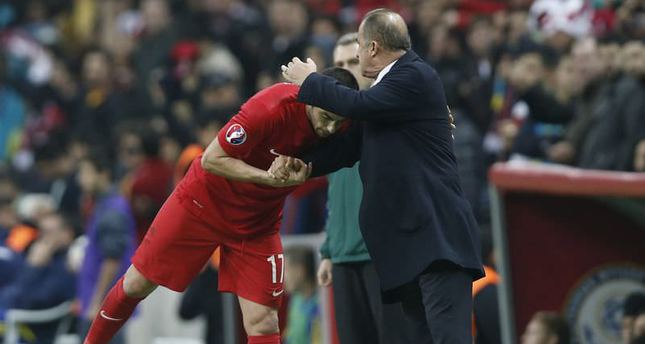 by Arda Alan Işık Nov 18, 2014 12:00 am
"We played really well tonight, especially the first half was amazing. Game was totally under our control until the last whistle." said Turkish National team coach Fatih Terim, after Turkey's first win in the EURO 2016 Qualifiers against Kazakhstan. Despite the opponent's obvious weaknesses, Terim was confident about his team's game, and he continued in this optimistic manner: "I hope this win will boost our team's morale pave the way for other victories.". Even though the team was not promising in the previous games, it looks like this first victory against "mighty Kazakhstan" is enough to forget the past for both Fatih Terim and the Turkish football media.

According to the FIFA World ranking, Kazakhstan is holding the 132th place at the moment. They have collected only one point (against Latvia), scored four goals and conceded ten goals in EURO 2016 group stages. Yuri Krasnozhan, coach of the Kazakhstan National Team, was aware of these facts and he said that it would be a success if his team could take one point from İstanbul. Thus, Kazakhstan rarely left their own half to create opportunities and could not make use of Turkish National Team's fundamental problems.

First of all, both Fatih Terim's and media's satisfaction about the game and the score against Kazakhstan is totally inconceivable. The opponent was not even able to make five passes in a row, but somehow most of the football columnists are talking about how Fatih Terim managed to fix his teams deficiencies in four days, after observing the bitter truth against Brazil. But the question is, can someone show me what Turkish team did constantly in the Kazakhstan match? Are there any proof that this score was not dependent to the opponent or was not a coincidence? Before ballooning the Turkish football team for their win against "mighty Kazakhstan", one should question what brought Turkish National team to this position. Until that criticism is done, you should prepare yourself for a nightmare against Netherlands.

The real test was not Kazakhstan, it was Brazil, and I do not see any positive signals to look forward optimistically. But the real problem which makes the situation much more desperate is Fatih Terim's inability to adapt his football perception to the new football. The team was strategically so insufficient that Arda Turan's center role in the game was not enough to create a pass circulation. Actually, this move reminded me Cesare Prandelli's radical choice to put Wesley Sneijder in front of the defense, in order to carry the ball to the opponents half. The difference is, Prandelli ordered other players to chose Sneijder as the first pass option. But Terim tried to organize his chaotic game with Arda Turan. In other words, he used Arda to shape the team's uncertain offense.

However, given that Arda's repositioning would not be adequate to beat Netherlands, Terim has to give up his chaotic strategy. Rather than seeking a surprise from chaos, he should immediately create a definite strategy. Seeing as it is not possible to create a sustainable game plan with players like Umut Bulut whom is a perfect symbol of Terim's chaotic game. Instead, he can mount Oğuzhan Özyakup and Hakan Çalhanoğlu to have a more fluid midfield. Add to that, these players' have less problematic fundamental skills than Selçuk İnan or Mehmet Topal. Therefore, it would be much easier to build a game on them.