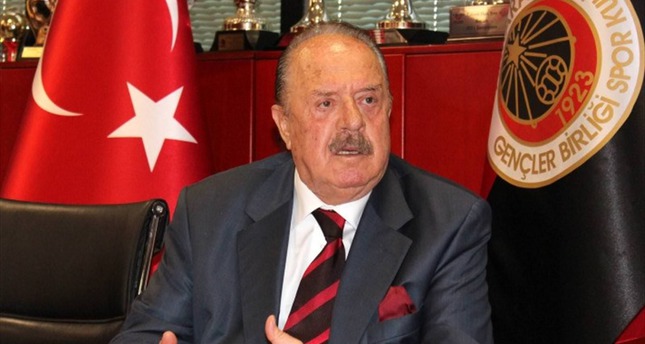 by daily sabah
Nov 19, 2014 12:00 am
İlhan Cavcav, chairman of Ankara-based football club Gençlerbirliği, drew the attention of world media after he said he would impose an $11,200 fine on any player that was seen sporting a beard. He had also put pressure on the Turkish Football Federation to impose a nationwide ban. Cavcav also compared players with facial hair to imam-hatip school (Religious vocational schools) students. "I'm 80 and I shave every day. Is this an imam school? You are a sportsman. You should be a role model for the youth," he added. But he took a step back yesterday and apologized for his words about imam-hatip schools.

In a written statement, İlhan Cavcav alleged that he "accidentally" used the word "imam-hatip," which was criticized as an ideological and political comment. Cavcav said that he did not mean to say it, but acknowledged his statement created a stir among the public. "Without a shadow of any doubt, anyone who plays in Gençlerbirliği Sports Club has the freedom of dress, in accordance with the Turkish Constitution," he said. Cavcav went on to say that religious values are untouchable. "I always respect these rights and freedom in my life and will continue to respect them. What I dislike is that some young people have lost themselves in interesting fashion trends and use different styles of beard and haircuts which, I believe, do not look nice," he continued.

Cavcav said that he does not have the right to control or interfere in this issue although he is the chairman of Gençlerbirliği. "As a father or grandfather, I only advise football players who are taken as a role model by youth to pay attention their appearance. There is not any ideological or political intention in my statement," he continued. Cavcav extended his apologizes to those who were offended by his description. Cavcav is not the first football manager to become vocal about the outward appearance of his players. In 1998, Argentina manager Daniel Passarella refused to pick Real Madrid midfielder Fernando Redondo for his World Cup team until he cut his hair.