A specter is haunting Turkish Football 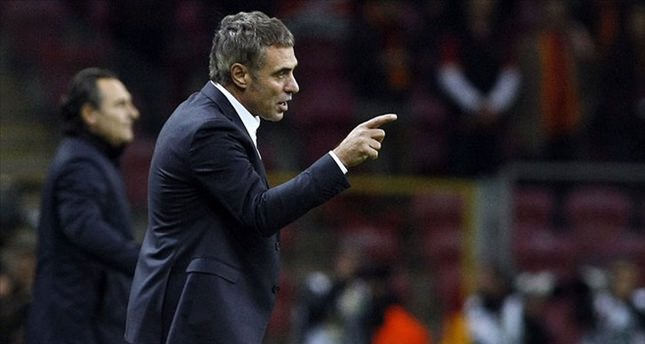 by Arda Alan Işık Nov 25, 2014 12:00 am
"This is not magic" said brand-new Trabzonspor coach Ersun Yanal, after his side's splendid 3-0 victory against Galatasaray. "We knew if we could press them in their half and be quick, Galatasaray's defense would break down. Nonetheless, we could have scored more goals and it is too early to infer a bright picture from this game. We still have a long way to go before we settle my strategy."

It is not every day you see a Turkish coach frankly criticize his team after beating an Istanbul giant 3-0 in their own backyard. But Yanal is different in many aspects from his colleagues. As I said when analyzing Fenerbahçe's game, Yanal is one of the few systematic and logical coaches in Turkish football. Since his days working with Gençlerbirliği, he has always been faithful to his own strategies and tactics. Even though he did not have a playing career and his practice sessions are often described as "weird looking," he has managed to build a coaching career in Turkish football.

However, just like Yanal said after the game, it is too early to talk about Trabzonspor's game. Thus, this sensational result was much more related to Galatasaray's, or Abdurrahim Albayrak's, performance.

If a team's best ball carrier and technician, and whom around the team's strategy is built, is left out of the squad, it usually means there are some dark things going on behind the scenes. If you look at Prandelli's decisions before and after Abdurrahim Albayrak, you will see the difference in the Italian coach. From the squad's choice of tactics, it is obvious that Albayrak is managing Galatasaray right now. If the management's economic plans caused Wesley Sneijder's omission from the game squad, then no one can blame just Cesare Prandelli for Galatasaray's performance.

The conflict between Albayrak and Prandelli is not the first of its kind. This is what happens when all reformist and modern coaches come to Turkey. The "ancient" administrative approach of Turkish football clubs makes for neither sustainable strategies or future plans. Thus, today the old and new paradigms of football are clashing at Galatasaray. Like most Turkish executives, Albayrak also wants to be involved in every process going on with the team. But this clearly prohibits a coach from building his own strategy. On the other hand, it is illogical to expect Cesare Prandelli's resignation. He signed a two-year contract and should have that time to prove his worth. Nevertheless, as we see in Sneijder's situation, he should not let Albayrak intervene in his job.

Bilic has to make a decision

Elsewhere, Beşiktaş beat Kasımpaşaspor 2-0 in their "new" home. Jose Sosa's performance was especially impressive. His technical skills and game vision is taking Beşiktaş's game to a higher level. However, Gökhan Töre on the other hand, is failing to adapt his style to a more collective strategy. Thus, encouraging Töre to make his penetrating runs while Sosa tries to organize a mature attack is contradictory. Töre's unpredictable game style not only decreases Beşiktaş's offensive power but also imbalances the defensive line. Seeing as Oğuzhan Özyakup is much more suited to a team game than Töre, Bilic has to make a decision. He can hope to gain some profit from Töre's chaotic play, which could be effective in the Turkish Super League and the early stages of UEFA Europa League, or he can try to organize a collective and sustainable strategy with Oğuzhan Özyakup and Jose Sosa.

Either Fernando Muslera is not playing very well or there is some administrative stuff going on with him. His performances have decreased significantly compared to his last two years at Galatasaray. His reactions are slow and the positive passing skills from the beginning of the season are gone. Therefore, Sinan Bolat could be given a chance to prove himself. I do not know his training performance but his previous form deserves a chance. Elsewhere, Cenk Gönen still has to be more confident and precise in his decisions. Given that determination is one of the most important things for a goalkeeper to have, at least he is a match for Tolga Zengin in that regard. In the Kasımpaşaspor game, he could have caught two or three long balls easily but he could not make a decision and eventually Kasımpaşa found opportunities.