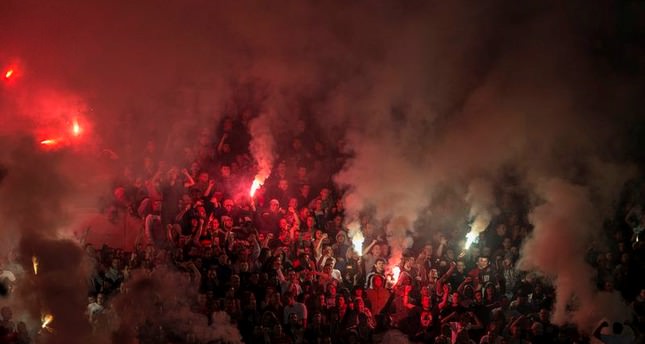 by daily sabah
Nov 25, 2014 12:00 am
Five people have been arrested on Tuesday in connection with the murder of Serbian basketball fan who was stabbed to death in Istanbul when an argument between rival fans turned violent after the match.

Arrests came after the police discovered footage recorded by security cameras in the area and, after considerable exertions, Istanbul Public Security Bureau identified five people, who were taken into the custody on Tuesday.

Marko Ivkovic, 25, was at the Abdi Ipekci Arena in Istanbul to support his Belgrade team Crvena Zvezda-Red Star against Galatasaray Liv in a Turkish Airlines EuroLeague basketball match on Friday. Ivkovic was stabbed in the chest when an argument between rival fans turned violent after Red Star fans allegedly arrived at the venue without tickets for the game according to a statement released by the Istanbul police department. The violence began with rival team fans throwing stones and bottles at each other, the statement added.

After the incident, Turkey's Prime Minister Ahmet Davutoğlu offered his condolences to Serbian counterpart Aleksandar Vucic in a telephone call over the death of Serbian fan and assured Vucic that Turkish authorities would do everything to arrest the perpetrator of the attack and bring him to justice as soon as possible.

The Turkish Basketball Federation also published a condolence message for the deceased Serbian fan. Serbia summoned the Turkish ambassador to Belgrade, after relations between the two countries were rocked by the crime. Ambassador Mehmet Kemal Bozay told reporters after his meeting that he offered his condolences and said: "I told them the investigation into the incident is ongoing and that I will inform them of any developments."
Last Update: Nov 26, 2014 9:26 am