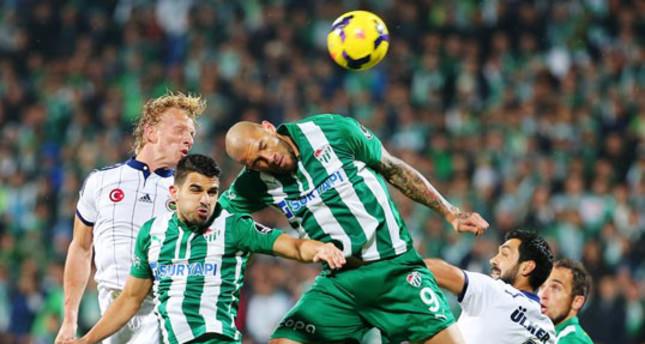 Fenerbahçe failed to beat Bursaspor to take a clear lead at the top of the table, drawing 1-1 needing a Dirk Kuyt penalty in the second half to save the point. While the club worry about whether they can overtake Beşiktaş, the headlines have firmly focused on their star Caner Erkin's outburst.

Caner Erkin has apologized to the club after his verbal outburst following a first-half substitution during his side's 1-1 draw with Bursaspor. "I want to apologize to everyone for my behavior," Erkin said.

"I am an aggressive player but it is no excuse to behave in the way I did today against Bursaspor.

"I want to apologize to my teammates, to my manager and to the fans.

"I made a mistake and apologize to everyone. I'm an aggressive and hot-tempered footballer and I will never do such a thing. It was an unlucky situation. I did not want to disrespect anyone. I have to control myself. The goal we conceded was my fault. I missed Volkan Şen in that position. And later I missed a goal. All of these made me angry. I talked to my coach and don't think there will be problems between us.

"We conceded the first goal because of my mistake; I really wanted to make amends so was frustrated at myself more than anything when I saw my name on the board.

"I am really sorry."

Fenerbahçe coach Ismael Kartal was quick to forgive his star left back, saying the two are like family and that Erkin wasn't in control of his faculties at the time.

Kartal said, "What Caner did was an involuntary movement. The goal we conceded early made us anxious. But later we balanced the game. We found the net thanks to the changes we made in the second half. Both teams could have won the game. I congratulated my players even though we got one point because this was a very difficult game. Caner is a young player. I'm his elder brother or father. We are a family. We solve the crisis within our family. There's no problem for me."

Fenerbahçe's win puts them joint top of the table with Beşiktaş, not just on points but with everything else.

Both teams are equal in points, wins, losses, draws, goals conceded and scored. Fenerbahçe should hold the top spot due to their win in the head-to-head clash with Beşiktaş earlier this month. But for some reason, Beşiktaş hold the top spot on the Turkish Football Federation website.

On the pitch, Fenerbahçe went down early, with Sercan Yıldırım scoring inside three minutes before Kuyt netted from the penalty spot to grab the point 24 minutes from time.

"To be honest it was a hard earned point, tougher than expected," Emmanuel Emenike said.

"We could have even won the game but it was a really tough match and I thank God that we were able to leave here with a point.

"It was not my best game, I am not going to put it down to being played out wide or wherever, I play as the center forward sometimes and on the wing sometimes.

"I try to do everything I can for the team."