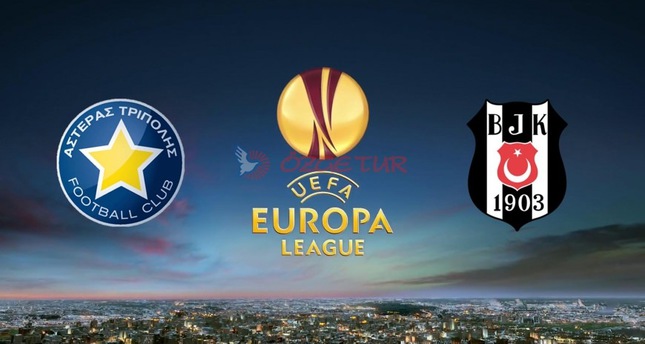 by daily sabah
Nov 27, 2014 12:00 am
BEŞİKTAŞ will play Greek side Asteras Tripolis in the UEFA Europa League Group C match today in Tripolis, Greece with tension expected to be high. Ahead of the match, Greece's Olympiakos fans called on their fellow Greek football fans to come to the stadium to protest the murder of a Serbian basketball fan in Istanbul. Marko Ivkovic, a 25 year-old basketball fan, was stabbed to death in the chest outside Abdi İpekçi Arena before a game between his team Red Star Telekom Belgrade and Galatasaray Liv Hospital on Nov. 22. On arrival in Tripolis yesterday with the team, Beşiktaş's Vice President Ahmet Nur Çebi reacted to the Greek rallying cry, saying, "We conveyed our security concerns to UEFA officials and wanted them to take extra measures for our team's safety. I don't think there will be a problem. Sports is brotherhood. I invite everyone to be calm. The murder of the Serbian fan must not have happened. We are brother to everyone. We are a beloved team in the world." As for the match, Çebi said, "We have a difficult match schedule ahead of us. We must never underestimate our rivals. When Asteras came to Turkey, everyone thought we would easily win. But we drew with them 1-1. We want to beat Asteras and Tottenham in our group matches and qualify in first place." Asteras Tripolis must win if they are to be sure of having something to play for on matchday six as Beşiktaş come to Greece in UEFA Europa League Group C. The sides drew 1-1 in Turkey on matchday one in the first meeting for both with teams from their opponents' nation. This is Beşiktaş's sixth group stage campaign in this competition; they failed to make it through three UEFA Cup group stages but have progressed on both attempts since the advent of the UEFA Europa League. Asteras's 2-1 loss to Tottenham on matchday four was their first UEFA club competition home defeat, bringing to an end a run of four straight European home wins this season. They have yet to win a UEFA game away from home. In the other match in Group C, Tottenham will play against Partizan Belgrade from Serbia.