Beşiktaş grab spot in the next round after draw 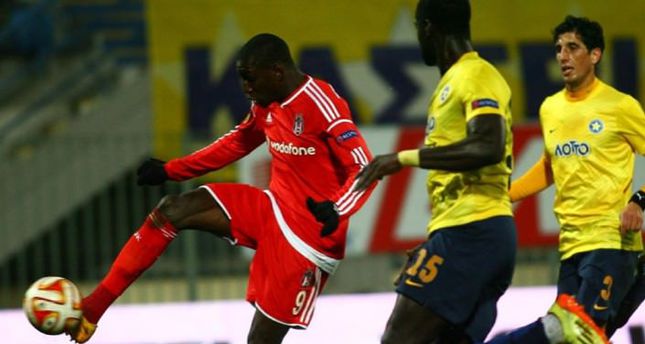 Beşiktaş qualified for the next round of the Europa League despite throwing away a two-goal advantage against Asteras Tripilos, drawing 2-2 on Thursday night. The 10-man Istanbul side allowed themselves to give up a 2-0 advantage, but their Greek opponents weren't able to completely overturn the two-goal deficit to keep their place in the competition.

Asteras needed the full three points to give themselves a chance of moving to the next round but they fell short while Beşiktaş moved on with nine points and one game in hand. Demba Ba, as usual, was on the scoresheet while his provider, Gökhan Töre, netted Beşiktaş's second goal. A strong start by the Greeks was quashed by Ba's opener, a beautiful volley from Töre's cross. The Senegalese should have grabbed a second seven minutes after his 15th minute opener but the striker somehow managed to slice wide from five yards out after Olcay Şahan's perfect pass. On the hour mark, Dorin Goian brought down Şahan in the penalty area. Töre stepped up to smash the ball into the roof of the net and give Beşiktaş a two-goal lead. Hope was restored for the home team when Khalifa Sankare flicked on a free kick from Jeronimo Barrales to make it 2-1. Atiba Hutchinson threw the Greeks an extra lifeline by getting himself sent off after picking up a second yellow card.

Tasos Bakasetas's hopeful effort squirmed under Cenk Gönen to bring the team level. A fairytale finish wasn't forthcoming for the Greek side, knocking them out of the competition and giving Beşiktaş a safe passage into the second round.

Beşiktaş's Group C rivals Tottenham Hotspur put themselves in the driving seat for the top spot after they beat Partizan Belgrade 1-0 in London. Benjamin Stambouli's 49th minute winner was enough to give the home side the win although they had to rely on Hugo Lloris's stunning last-gasp save from Vladimir Volkov.

Tottenham only need a draw with Beşiktaş in the group's final round in Istanbul to guarantee the top spot and the top seed. French international Lloris gave Beşiktaş fans some confidence by admitting that his side are vulnerable to mistakes.

"Other teams know how to play against us - they stay behind the ball and play on the counterattack," said the goalkeeper. "We have a style with a lot of short passes and therefore any mistake can be a big opportunity for the opponents. We need to resolve this problem, to be tighter and try to find confidence again. You need to have the feeling at the end of the game that you have no regrets and in the last few games at home [in the league] we left the pitch with a lot of regrets. "At the moment we are trying to find solutions for the team and to improve, and we will see in the second part of the season if we can do that. We need to keep working and believing. It's been frustrating for the staff and all the players so far and we need to resolve our problems. We know we have a lot of talented players in the squad, and we also have a lot of young players, but there is a lot of expectation and we have ambition."

The other Turkish giants, Trabzonspor defeated Ukraine's Metalist Kharkiv 3-1 on Thursday, and advanced to the next round in the Europa League.