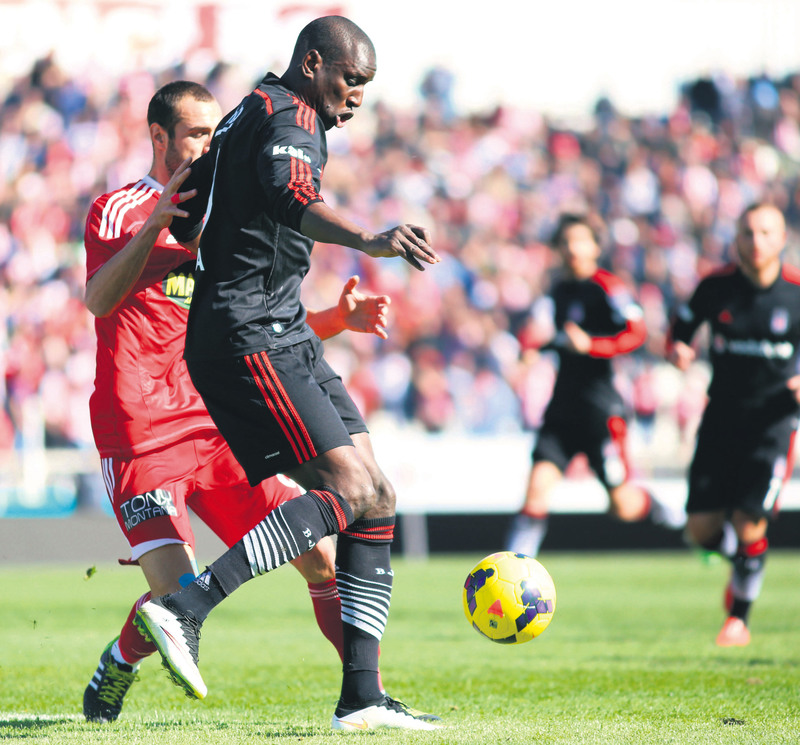 Sivasspor made Beşiktaş sweat for a valuable win that came via Hutchinson's first half winner. The Black Eagles continue to claim the Super League title along with Galatasaray and Fenerbahçe

Beşİktaş took all three points in a nervy 1-0 win over Sivasspor yesterday. The win put them joint top with Galatasaray who played Fenerbahçe after the time of print. Sivasspor applied the pressure late on, with John Utaka heading against the crossbar in the dying seconds, but Beşiktaş held firm to take the win and the points.

Beşiktaş broke the deadlock after being second best for much of the first half when Atiba Hutchinson got his toe on the end of Necip Uysal's long ball, flicking the ball past the goalkeeper with moments left to go in the first half.

The two sides began aggressively, taking every opportunity to attack down the wings. Although Gökhan Töre made some early inroads, it was Sivasspor that took the first shot across the bows. With 11 minutes gone, Aatif Chahechouhe took a ferocious effort from 30 yards that just cleared the crossbar with Cenk Gönen at full stretch.

While Beşiktaş were occasionally able to make forays into the Sivasspor half, they shot themselves in the foot with their propensity for lumping the ball up to the forward line where the recipient was usually surrounded by defenders. Sivasspor continued their aggression and they nearly grabbed the lead again when Manuel Da Costa forced Gönen into a smart save. Whether Da Costa meant to cross or shoot is up for debate, the Moroccan international's inswinging effort from the edge of the area had Gönen scrambling across his goal line to paw the ball out for a corner.

Although Beşiktaş's long ball policy usually came to nought, they were able to take the lead thanks to such a speculative ball. Captain Necip Uysal picked out the deep run from Atiba Hutchinson with a perfectly executed pass. The Canadian managed to get out in front, beat the goalkeeper to the ball and flick the ball into the net with the slightest of touches, silencing the Sivasspor faithful just before half time.

Uysal was at the center of attention moments later when John Utaka appeared to headbutt the defender, although no action was taken. Burhan Eşer gave Beşiktaş a scare with 20 minutes to go, shooting just wide from range as Sivasspor piled on the pressure in search for an equalizer although they nearly dug a hole for themselves when the Sivasspor goalkeeper mishit a clearance straight to Demba Ba. Fortunately for the home side the Senegalese striker sliced the ball wide. Despite all of Sivaspor's pressure, they were rarely able to test Gönen and the best of their efforts came from long-range efforts. Utaka nearly stunned Beşiktaş in the final minute but his head cannoned off the crossbar.

Töre constantly looked to attack the Sivasspor defense, perhaps knowing that his former club Chelsea and Atletico Madrid, who are believed to be selling Turkish star Arda Turan, are watching him. Although no official bid has been made, Töre's agent Ali Pektaş confirmed that there was interest from the two major clubs.

"Yes these clubs [Chelsea and Atletico Madrid] are interested but we have not had a direct offer yet," Pektaş told Radyospor. "Töre still has a contract with Beşiktaş so any talks have to go through the club." Elsewhere on Sunday, Konyaspor picked up a point in a 0-0 draw away with Istanbul Başakşehir.

Elsewhere over the weekend, Gençlerbirliği picked up a 4-2 win away from home against Erciyesspor. Aleksander Hleb and Guy-Michel Landel gave the away side a 2-0 lead going into half time. Yacouba Sylla got Erciyesspor back into the game in the 66th minute before Mervan Çelik restored Gençlerbirliği's two-goal advantage with 13 minutes left. Landed put the game beyond doubt five minutes later before Serdar Gürler scored a 90th minute consolation goal. Later on Saturday, Balıkesirspor picked up a 2-2 draw at home to Çaykur Rizespor, letting slip a two-goal lead late on. Ermin Zec and Ante Kulusic scored in the fourth and 49th minutes respectively to give the home side a comfortable cushion. But goals from Kıvanç Karakaş and Leonard Kweuke in the 77th and 83rd minutes undid Balıkesirspor's early hard work. In the day's other game, Eskişehirspor and Bursaspor played out a drab 0-0 draw.
Last Update: Mar 09, 2015 1:12 am
RELATED TOPICS