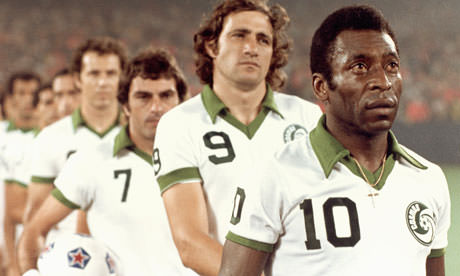 by Mar 17, 2015 12:00 am
The New York Cosmos will play Cuba in a "historic" football friendly on June 2 in Havana, the US team said Monday, hoping to break down decades-old political barriers through sport.

The Cosmos -- a second-level squad boasting the former Real Madrid captain Raul -- will make the first visit to Cuba by a US professional sports team since 1999, when Major League Baseball's Baltimore Orioles played an exhibition there.

The trip comes after US President Barack Obama's announcement in December that Washington would seek to normalize relations with communist Cuba after five decades in the deep freeze.

"I for one have always believed in the power of sport to bring people together and to bring down barriers. We hope we can inspire others," Cosmos chairman Seamus O'Brien said.

"We are therefore honored to be the first professional team in sports to visit Cuba since President Obama's historic opening of diplomatic relations."

The Cosmos roster is a far cry from its 1970s heyday boasting Pele and Franz Beckenbauer. The team come off a 2-2 draw in Hong Kong last month against a South China squad and a 1-0 loss Saturday to club side FAS in El Salvador.

Charles Rangel, a US House Democrat from New York, said cultural exchanges and friendships the Cosmos and Cubans build will be invaluable.

"This is historic, not just for you sports fans but for those who are looking ahead to see what kind of world we are leaving for our children and grandchildren," Rangel said.

Regional football governing body CONCACAF and the US State Department opened discussions between the club and Cuban authorities. Talks were staged in January at Jamaica.

"We hope that our match will be an important step forward in growing the popularity of the global game in Cuba and improving relations between the two nations," O'Brien said.

Cosmos coach Giovanni Savarese will use the match to help his team during a bye week in its US league season while the Cubans will be preparing for the Gold Cup continental tournament in July.

"We're definitely excited for this opportunity. It's a historic moment," Savarese said. "It will be a great match to bring people together."

O'Brien said the logistics of the trip, such as visas and transportation, remain in discussion.

"It's a work in progress," he said. "A lot of moving parts. And government departments are working very hard."

Cuban coach Walter Benitez said there is great excitement in Havana for the match.

"When they informed me the possibility existed to play the Cosmos, I jumped at the chance to play a club with such history and prestige," Benitez said.

Savarese added that the match will remain about sport and not political rivalries and ideologies, saying: "The most important thing is soccer."