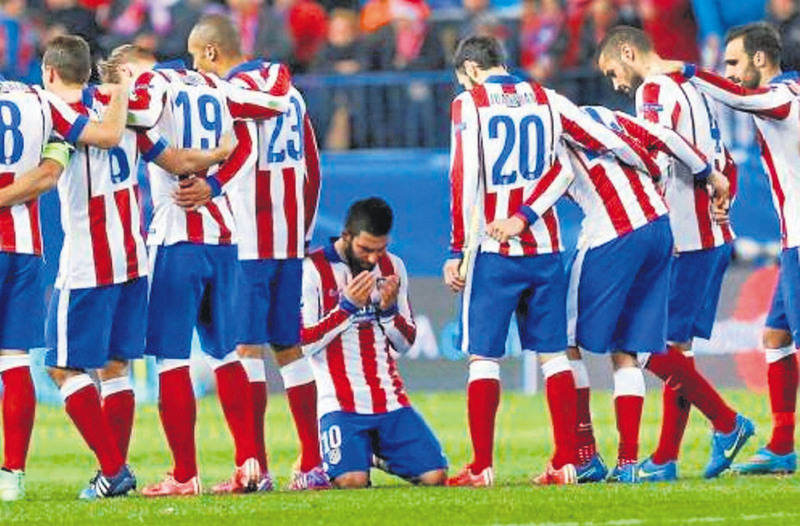 Atletico Madrid advanced to the last eight of the Champions League on Tuesday night but only after a dramatic penalty shoot-out victory over a brave Bayer Leverkusen. It was more interesting for Turkish football fans. Both teams' three Turkish footballers clashed with each other while two of them experienced tragic moments after shootout. Leverkusen's Turkish stars Ömer Toprak and Hakan Çalhanoğlu missed penalties along with fellow team-mate Kiessling. All the Turkish footballers played throughout the whole game. Atletico's midfielder Arda Turan was selected the man of the match. He worked tirelessly for 120 minutes, winning tackle after tackle in the middle of the pitch.Having consoled fellow his rival compatriots, Turan said "It was a very stressful match. Because 1-0 was a very dangerous score. Luckily we did not not concede a goal. And at the end we are very proud of qualifying. Leverkusen are a good team. Our goalkeeper saved a penalty although he did not play for a long time. We are passing through a hard period. We needed this win. I hope we will reach our aim."

Turan added, "Both Ömer and Hakan are very precious players. They serve their country. I hope they will play in the finals in the future. Both of them have good characters. I'm sorry for them but that's the way it is."

Meanwhile Hakan Çalhanoğlu said, "We put in a good performance during 120 minutes. However penalty means a little luck. Unfortunately we missed. I think the goalkeeper guessed where I aimed the ball. I also hit the ball badly. Arda Turan came near me after the match and said that I'm a big footballer." Toprak said, "We did not deserve this result. We gave a hard time to Atletico in both matches. Unfortunately we lost on penalties. I'm very sorry. In the first goal the ball bounced from my foot and conceded a goal. After that I missed a penalty." Atletico Madrid coach Diego Simeone admitted to having "goose bumps" after his side overturned a first-leg deficit and knocked Bayer Leverkusen out of the Champions League.

Atletico lost 1-0 at Leverkusen in the first leg but a first-half goal from Mario Suarez left the rivals locked at 1-1 after extra time in the return match at a typically vibrant Calderon stadium. Each side failed with two spot kicks in the shootout before Leverkusen striker Stefan Kiessling sent a wild effort over the crossbar with the Bundesliga side's fifth penalty to send Atletico through 3-2.

The shootout success, Atletico's first in four attempts in European competition, kept their dream alive of a second straight appearance in the final after they were beaten 4-1 after extra time by neighbours Real Madrid in last season's showpiece in Lisbon. "I am among the eight best teams in Europe again with Atletico and it gives me goose bumps to say it," Simeone told a news conference.

"The fans delight me," added the Argentine. "The supporters don't realise the strength they give the players."

There was more good news for Atletico fans with Simeone's sister and agent Natalia hinting to Spanish television broadcaster TVE that her brother had agreed to extend his contract beyond 2017 when his current deal expires. Leverkusen coach Roger Schmidt was gracious in defeat, congratulating Atletico and praising his own players for their efforts. "We are a young team with little experience and it is not easy to hang in there at a stadium like Atletico's," the German told reporters. "In the shootout we lacked concentration and calm. After fighting so hard we are very disappointed. But the players gave their all and so we leave feeling satisfied."

Elsewhere Arsenal exited the Champions League on Tuesday despite winning their Champions League last 16 second leg clash 2-0 in Monaco but losing on the away goals rule after the tie finished 3-3 on aggregate.

A first-half goal by Olivier Giroud and then Aaron Ramsey 11 minutes from time gave the Gunners hope but desperate defending by Monaco saw them hold on to reach the quarter-finals in front of a for once packed stadium which included celebrities such as U2 frontman Bono.

Arsenal manager Arsene Wenger was gracious in defeat which ended for another season his ambition of winning the piece of silverware he most desires. "We knew it would be very difficult to score that many goals," Wenger told BeIn Sport. "We weren't realistic enough in our approach. "It's not a question of if we deserved to go through but of being realistic and we made too many errors in the first leg. "We have to congratulate Monaco for their place in the last eight as they defended really well. "In the last three months we haven't lacked in anything except our performance in the first leg. "We have a superb spirit and great qualities," added the Frenchman, who first made his name as a top level coach at Monaco.