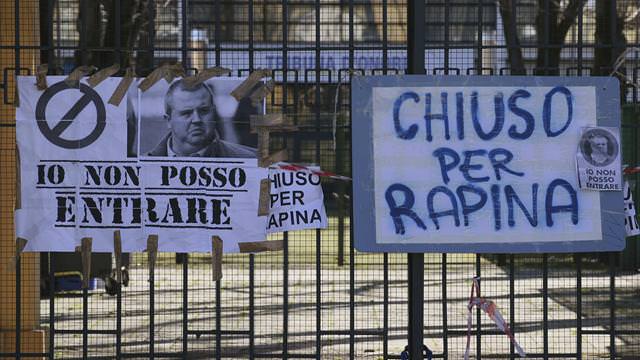 by Mar 19, 2015 12:00 am
The immediate future of stricken Serie A club Parma was left hanging in the balance on Thursday after the cash-strapped former UEFA Cup champions were declared bankrupt and put into administration. After months of upheaval that has seen the club's ownership change hands several times and their latest chairman held in custody, a tribunal delivered the news most had been expecting.

Club official Osvaldo Riccobene said: "The club's creditors called for bankruptcy, which was accepted by the prosecutor of the Republic. We did not oppose the decision." In the absence of current Parma chairman Giampietro Manenti, Riccobene and fellow Parma official Enrico Siciliano represented the club at Thursday's scheduled hearing to decide its future.

Manenti, who bought the club for the symbolic price of one euro and failed to fulful promises to pump millions into Parma, was arrested on Wednesday along with 21 other people on charges which included money-laundering. Whether Parma can survive long enough to play their next league game, at home to Torino on Sunday, is unclear. A definitive and more complete decision by the tribunal is expected later Thursday or Friday.

According to the Gazzetta di Parma, tribunal judge Pietro Rogato has appointed two administrators, Angelo Anedda and Alberto Guiotto, to oversee the club's management and to allow it to operate under supervision. The newspaper's report said Parma have run up total debts of 218.44m euros, 63m of which related to players' salaries, and had negative equity of 46.7m euros. Rogato was quoted as saying in the report the club's "state of insolvency seems clear and irreversibile."

Club captain Alessandro Lucarelli, one of the club's creditors, hit out after the hearing: "It's ridiculous. There is just no limit to the embarrassment." The bankruptcy decision was largely expected amid what has been a spectacular fall from grace for the two-time UEFA Cup winners.

Current coach Roberto Donadoni steered Parma into this season's Europa League but they were replaced in the competition by Torino when Tommaso Ghirardi, the former club owner who sold Parma in December, failed to pay owed taxes in time. The club were then docked a point by league officials in December in relation to unpaid salaries from July, August and September 2014.

Ghirardi sold the club days before Christmas but since then Parma has seen several owners. The latest, Manenti, was unable to represent the club at Thursday's hearing because he was behind bars on charges of money laundering and embezzlement.

In recent months there have been concerted efforts to help keep the club afloat financially. Serie A officials had given Parma a November 17 deadline to make amends although the squad, as well as the club's employees, have not been paid since July 2014.

In early March the Italian professional football league voted in favour of loaning Parma five million euros in a bid to help them see out the season, but Wednesday's arrest of Manenti appeared to scupper those hopes. Riccobene added: "I think we should still be able to play on Sunday. But that is my assumption. "If we don't take to the pitch, it would be a massive blow."
Last Update: Mar 19, 2015 7:32 pm
RELATED TOPICS