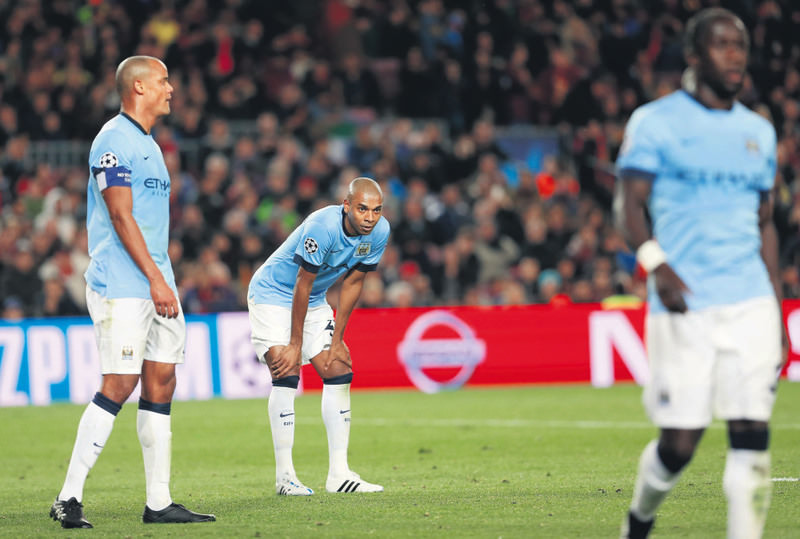 by French Press Agency - AFP
Mar 20, 2015 12:00 am
Despite their new 5.1 billion pound television rights deal, the blanket failure of Premier League clubs in the Champions League has left England looking like Europe's poor relation. After Liverpool, Chelsea and Arsenal fell, Manchester City's elimination by Barcelona on Wednesday left England with no quarter-final representatives in Europe's elite club competition for the second time in three years. For a country that supplied three of the four semi-finalists in 2007, 2008 and 2009 - and eight of the 16 finalists between 2005 and 2012 - it appears to represent a startling fall from grace. And with Hull City, Liverpool and Tottenham Hotspur having all fallen short in the Europa League, Everton were the last English team still standing in Europe prior to the second leg of their last 16 tie against Dynamo Kiev as of yesterday. In the Champions League, English clubs have acquired an unfortunate queasiness about progressing beyond the last 16. Since 2009-10, 18 of the Premier League's 24 participants have made it past the group phase, but only eight have progressed to the quarter-finals and only three have gone on to reach the last four. Attempts to explain the malaise have fallen back on old concerns about England's draining mid-season schedule, which once moved UEFA president Michel Platini to observe that English clubs were "lions in the winter, but lambs in the spring." "This round (of 16) is particularly difficult for English teams," City manager Manuel Pellegrini told The Guardian this week. "Not having a winter break gives other leagues' teams an advantage. Boxing Day is non-negotiable, a wonderful tradition, and changing it would be absurd, but you can't play nine games in December and nine in January. It's a heavy load."
Last Update: Mar 20, 2015 1:47 am