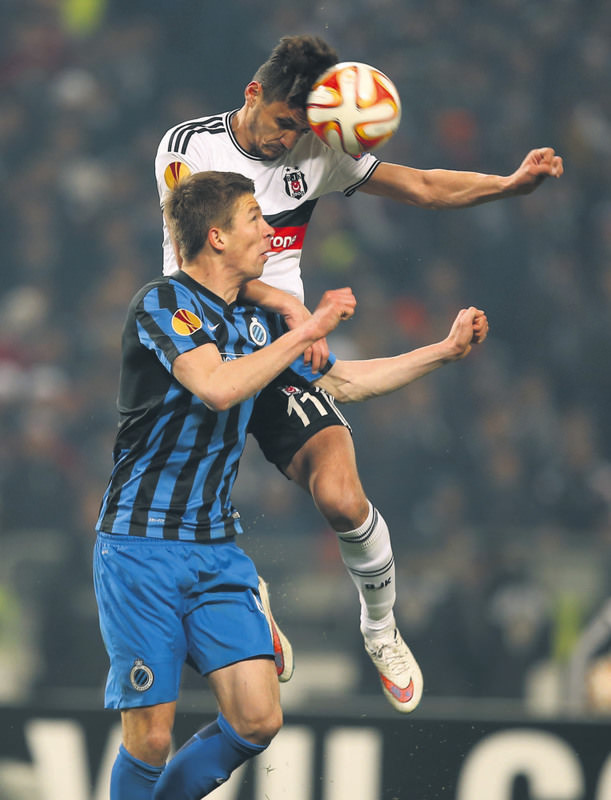 Although Brugge skipped past Beşiktaş 3-1 in the UEFA Europa League, Turkish teams will be able to participate in next year's Champions League directly thanks to the points Black Eagles collected

The night at the Atatürk Olypic Satdium was a colorful occasion to begin with, with the Beşiktaş fans lighting torches and cheering frenziedly on the 112nd birthday of the Turkish powerhouse. Beşiktaş were founded on March 19, 1903. So at 07:03 p.m. sharp, the Beşiktaş fans turned the night into day with burning torches. The air was filled with smoke so thick that one could hardly breathe. And starting the match hopefully, Beşiktaş fans were left euphoric in the 48th minute after a magnificent goal from Ramon Motta. Beşiktaş's left-back Motta's thunderbolt from outside the penalty box beat Brugge goalkeeper Matthew Ryan for one of the goals of the tournament so far. But after the goal, Beşiktaş could not resist Brugge's pressure and in the 61st minute, the visitors' Belgian target man Tom de Sutter finished in a one-on-one position after receiving a through ball to make it 1-1. In the 80th minute of the game, the Belgians came back when left-back Boli Bolingoli-Mbombo hit them on a breakaway to take the lead. Near the end of the game, Brugge made it three after Bolingoli-Mbombo finished in the box after taking advantage of Necip Uysal's mistake. Winning the round 5-2 on aggregate, Brugge advanced to the quarter-finals in the Europa League and Beşiktaş were eliminated from the tournament. However, thanks to the successful results and points Beşiktaş gained in the UEFA Europa League, the Turkish league winner will be able to enter Champions League directly. Beşiktaş Club Speaker Metin Albayrak said, "We are very sorry. We apologize our fans. We thank our players. They made us proud by advancing such a great stage. Beşiktaş made possible for Turkish teams to participate in the next year's Champion League directly with the points they collected in the Europa League. We could not give gift our suporters in our birthday. We will focus on Fenerbahçe derby now."

Meanwhile, the Beşiktaş fans' reactions against coach Slaven Bilic and his players hit the headlines in Turkey. After the disappointing result, Beşiktaş fans criticized their coach and players, despite having supported them during the game. Bilic criticized the fans' protestations and said they were very disappointed. He said, "Brugge qualified to the quarter-finals with their own efforts and they earned it. We were very good in the first half, dominated the game but unfortunately could not score. We had some opportunities hacked. We tried to be effective from dead balls. We managed to find a wonderful goal. But later we conceded a simple and easy goal. And we were shocked. So Brugge exploited our demoralization. After the second goal we lost our hopes and later the game." Beşiktaş's Senegalese star Demba Ba also criticized the fans. The popular and likeable striker could not hide his disappointment after the fans' angry treatment of him and his team-mates. He said, "We had believed that we could qualify. We played well and dominated the game for a long time. In the seventh minute, a Brugge player should have been shown a red card after he fouled me. I'm proud of my team-mates. We advanced to this stage together. But if the fans had supported us instead of whistling and booing, it could have been different." In another disappointment, Beşiktaş fans could not break the largest crowd record. They were expecting to break Manchester United's Europa League attendance record against Club Brugge. But 4,000 fans did not show up and the crowd number stayed at nearly 65,000. But on that day Dinamo Kiev did what Beşiktaş fans expected to do. The highest attendance record in a Europa League game was broken in the Dynamo Kiev - Everton match that drew 67,553 spectators to the game. Kiev beat their English rivals Everton 5-2. The former Europa League crowd attendance record was set in 2012 when 67,328 supporters filled the stands during the Manchester United - Ajax game at Old Trafford. Meanwhile, the Europa League quarter-final draws were made in Switzerland on Friday. Club Brugge will meet Ukraine's Dnipro in the last eight of the competition. Wolfsburg from Germany and Italian club Napoli were drawn together; defending Europa League champions Sevilla were paired off Russian side Zenit. It is reported that Zenit could not meet any Ukrainian team due to political crisis between the two countries. Fiorentina, the other Italian team to reach the quarterfinals, has been paired with Dynamo.
Last Update: Mar 21, 2015 2:08 am
RELATED TOPICS