Robben pulls out of Dutch squad for a qualifier against Turkey 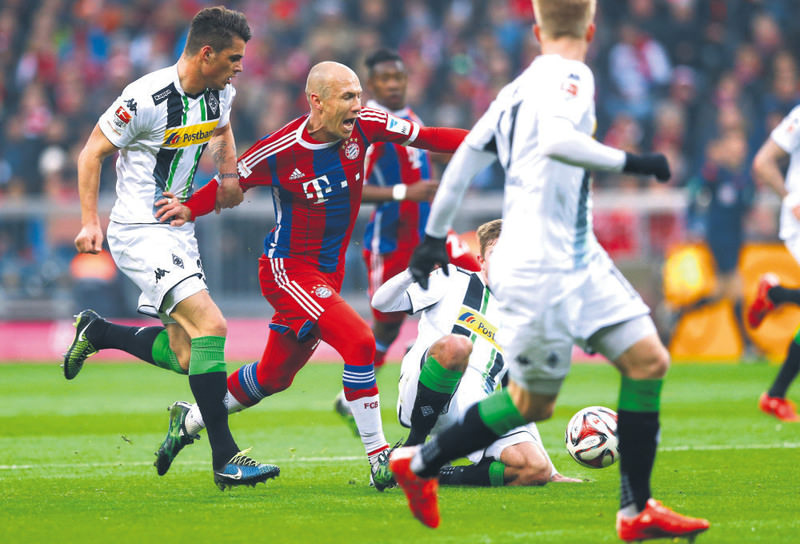 by Associated Press
Mar 24, 2015 12:00 am
Injured Bayern Munich winger Arjen Robben pulled out of the Netherlands squad late Sunday for a key European Championship qualifier against Turkey and a friendly against Spain. The winger's absence leaves coach Guus Hiddink missing two of his most experienced and most effective strikers against Turkey. Captain and the Netherlands' all-time international top scorer Robin van Persie is also out through injury, along with center back Ron Vlaar. Robben, who has been in stand-out form for club and country, was substituted in the 24th minute of Bayern's 2-0 home defeat to Borussia Moenchengladbach on Sunday with a stomach muscle injury. He had been due to gather with the rest of the Netherlands team Monday, but told Hiddink he could not make the trip. Hiddink did not immediately call up a replacement. The Netherlands, third in Euro 2016 qualifying Group A after four matches, takes on fourth-placed Turkey on Saturday at the Amsterdam Arena and meets Spain three days later at the same venue. The Czech Republic, with four wins out of four, leads the group, ahead of Iceland. The top two teams in each group qualify automatically for next year's tournament in France, as does the best third-place finisher. All other teams finishing third go into the playoffs. The friendly against Spain is a rematch of both sides' World Cup opener in Salvador, Brazil, last year that the Netherlands won 5-1 in a stunning game that set the tone for both teams' campaigns the Dutch went on to reach the semifinals while defending champion Spain was eliminated at the group stage. Van Persie scored a memorable diving header in Salvador and Robben used his searing pace and ball control to find the net twice.
Last Update: Mar 24, 2015 1:52 am