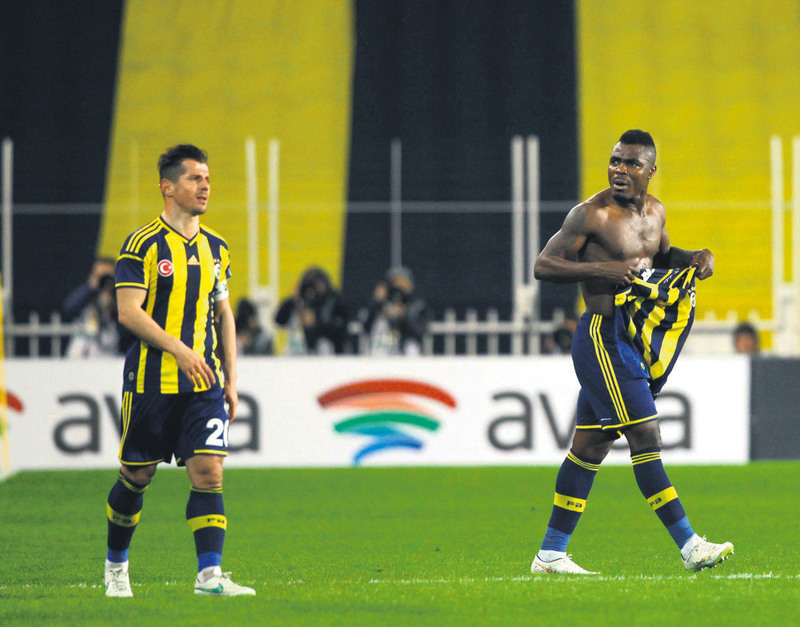 by Anadolu Agency Mar 26, 2015 12:00 am
A row between Istanbul rivals Fenerbahçe and Beşiktaş continues to rumble on days after Sunday's derby clash. Footage broadcast by Beşiktaş's TV channel on Tuesday purports to show Fenerbahçe's experienced midfielder and team captain Emre Belözoğlu in a foul-mouthed half-time outburst. In the video on BJK TV, a group of players and staff are seen trying to calm Belözoğlu down at half time in the tunnel of Fenerbahçe's Şükrü Saraçoğlu Stadium. Fenerbahçe went on to win the match 1-0. Speaking after a Beşiktaş board meeting Tuesday, club president Fikret Orman said that they are expecting Belözoğlu to be punished for his remarks. He added that Beşiktaş will appeal to the Turkish Football Federation's Disciplinary Committee. Belözoğlu was banned from playing for Turkey's national team for six matches after a tunnel bust-up in 2006 during a World Cup qualification match against Switzerland. Belözoğlu ban was later reduced to four matches by FIFA's Appeal Committee. In January 2007, while playing for Newcastle United in the English Premier League, Belözoğlu was accused of making racist remarks to Everton defender Joseph Yobo. The case remained unproven. The Turkish player found trouble soon after in February that year after facing accusations of racial abuse directed at Bolton's El-Hadji Diouf. Belözoğlu denied the allegation through his agent; Diouf declined to proceed with a complaint.

In April, 2012, Belözoğlu as accused of making abusive remarks against Trabzonspor's Ivorian defensive midfielder Didier Zokora. Belözoğlu faced a two-match ban by the TFF's Discipline Committee since he was found guilty of using abusive, but not racist, language against Zokora. Throughout his career, Belözoğlu, 34, has been shown nine red cards - including five direct ones - in 499 club level appearances at Fenerbahçe, Inter, Galatasaray, Newcastle United and Atletico Madrid.
Last Update: Mar 26, 2015 2:11 am
RELATED TOPICS