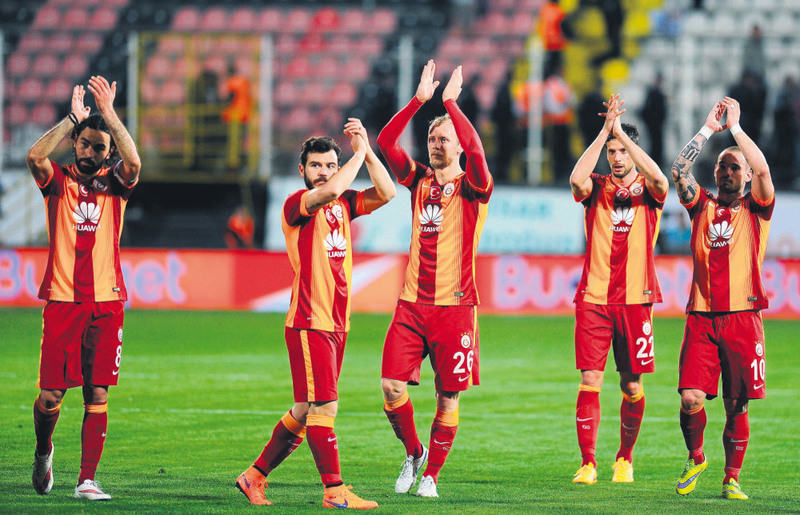 The Lions roared into the lead against Akhisar in the first half at the Manisa 19 Mayu0131s Stadium, thanks to two efforts from goal-hungry striker Burak Yu0131lmaz.
by Hakan Baş May 05, 2015 12:00 am

The three Istanbul rivals, Beşiktaş, Galatasaray and Fenerbahçe, are aiming for the top with only five weeks to go in the Spor Toto Super League

The Spor Toto Süper Lig title race looks set to go down to the wire this season as the three Istanbul giants breathe down each other's necks at the top with only five matches remaining. The race for the Süper Lig title remains wide open after Istanbul side Galatasaray beat Akhisar Belediyespor 2-0 on Monday. The win means that Galatasaray are still within striking distance of a 20th league title - trumping the record of city rivals Fenerbahçe. However, both Istanbul clubs still lag behind Beşiktaş, who remain on top thanks to goal difference.

The Lions roared into the lead against western Turkish club Akhisar in the first half at the Manisa 19 Mayıs Stadium, thanks to two efforts from goal-hungry striker Burak Yılmaz. Yılmaz found the net in the 22nd minute when Dutch midfielder Wesley Sneijder's shot was deflected by Akhisar's goalkeeper, but Yılmaz was able to find the net with a close-range shot.

This was Yılmaz's first goal since March 21, which was against Kasımpaşa, but he did not stop there. In the 34th minute, Yılmaz took center-stage one more time, delivering a header from a classy cross courtesy of winger Emre Çolak, making the score 2-0.

Meanwhile, the Lions' Uruguayan goalkeeper Fernando Muslera was in top form again, saving a critical three shots in the first half. Although there were dangerous attacks from both sides in the second half, the scoreline did not change and "Cim-Bom" won 2-0.

With the result, Galatasaray increased their league points tally to 64 and are now second on goal difference after Istanbul rivals Beşiktaş.

In the other game of the night, Sivasspor caused an upset against Kayseri Erciyesspor, 3-2. Sivasspor was trailing 0-2 after the first half, but "Yiğidos" were able to steal three points thanks to two goals from Burhan Eser in the last five minutes. After the 29th match day in the league, the title race is wide open with Beşiktaş leading on 64 points, Galatasaray with 64 points and Fenerbahçe with 63 points. With five matches remaining, the most exciting one will undoubtedly be played between Beşiktaş and Galatasaray just before the last week. If Galatasaray and Beşiktaş draw, Fenerbahçe may have a big gain. The other matches of the three powerhouses are not seen as particularly challenging because their Anatolian rivals are either in midtable comfort or already relegated.

Galatasaray and Fenerbahçe are also on the hunt for their fourth jersey star. In Turkey, one star represents five league trophies; so Galatasaray wear three stars because of their 19 championships, the same as their rivals Fenerbahçe.

Speaking following the match against Akhisar, Galatasaray coach Hamza Hamzaoğlu said, "We did not play in a way we desired. But we'd rather get three points than playing well considering how tight the title race is. The title race may come to its conclusion in the last match. It's a good and exciting competition. I hope the winner will be the most deserving."

Galatasaray's striker Yılmaz said, "Sometimes there happens to be a lot opportunities to score but man cannot evaluate them. But I have the luck against Akhisar and found the net twice. If we had lost points I'm sure I would have been criticized harshly." As for the top goal scorers, Bursaspor striker Fernandao leads the league in goals with 18. Besiktaş's Demba Ba is second with 17 goals and Galatasaray's Burak Yılmaz is third with 16.
Last Update: May 05, 2015 8:49 pm
RELATED TOPICS