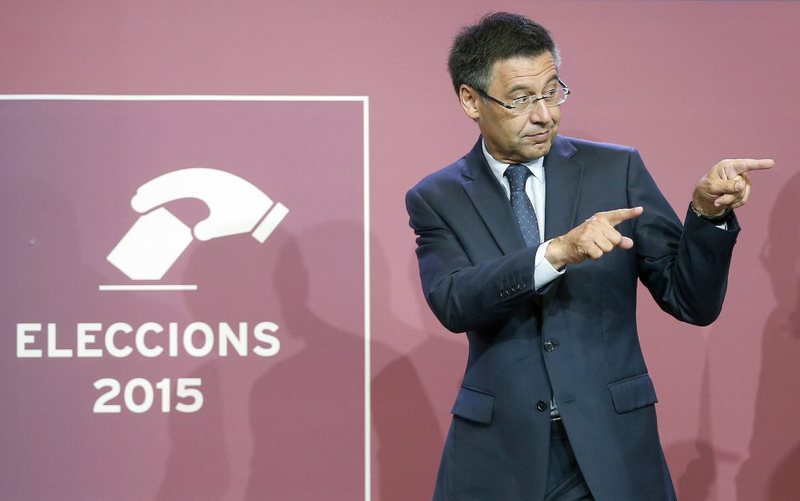 by Jul 19, 2015 12:00 am
Barcelona President Josep Maria Bartomeu, who was criticized by his rivals due to the transfer of Atletico Madrid's Turkish star Arda Turan, was re-elected to lead the treble winners for the next six years on Saturday, beating off the challenge of former incumbent Joan Laporta.

Bartomeu took over in January 2014 from Sandro Rosell who stood down following a probe into the signing of Brazil striker Neymar.

Despite a turbulent spell at the helm, Bartomeu received 54.63 percent of the votes with 25,823 members backing him while Laporta, president of the Catalan club from 2003 to 2010, took 33.03 percent. Agusti Benedito was third with 7.16 percent and Toni Freixa polled 3.70 percent.

"I am very happy. The majority has been very big to back our new project," Bartomeu told reporters.

"We will keep growing and winning if we keep looking after (coach) Luis Enrique and the players.

"We will keep growing and winning if we look after the Masia (youth academy). It needs to be effective and be the base for the first team so that players coming through show our style of play and values."

Bartomeu brought forward elections by a year with the club in crisis at board level last January over poor management and claims of corruption. He will also face trial for fraud over the Neymar move from Santos and revealed after taking charge that the real cost of his transfer was closer to 100 million euros than the 57.1 million euros they said they paid.

Barca also faced a FIFA transfer ban for a breach of rules in the signing of under-age players that led Bartomeu to sack sports director Andoni Zubizarreta and there were problems in the dressing room.

In early January Barca were trailing Real Madrid in the league and there was a widely reported bust-up between coach Luis Enrique and Lionel Messi.

The Argentine forward shook off the reports and led a turnaround on the pitch, capped when Barca lifted their fifth European crown in Berlin that convinced many fans to remain with Bartomeu.