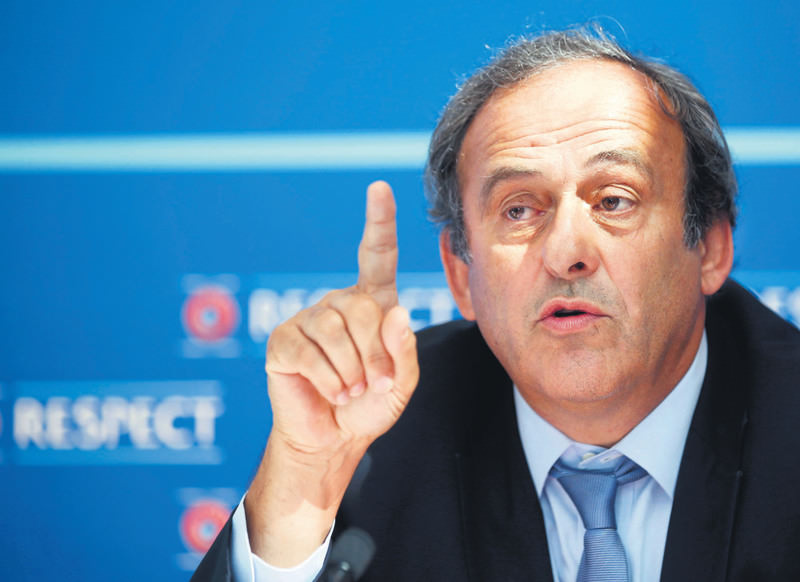 by French Press Agency - AFP Oct 01, 2015 12:00 am
The French football legend and UEFA president Michel Platini has insisted he will stay in the race for the FIFA presidency despite being named in a Swiss criminal investigation into the world football body.

The French football legend told AFP he had done "nothing wrong" and defended a $2 million payment approved by FIFA president Sepp Blatter.

Platini, who had been favorite to win an election for the FIFA president in February, spoke out amid reports that he and Blatter will soon be put under investigation by FIFA's independent ethics committee.

"I am still determined to present myself as a candidate for the FIFA presidency so I can introduce the governance reforms that are necessary to restore the order and credibility to world football," Platini told AFP.

The money was paid for work carried out between 1998 and 2002 but the payment was only made in 2011. The Frenchman, who has led UEFA since 2007, said the delay was because FIFA could not afford to pay him earlier.

"I was employed by FIFA as a special advisor to president Sepp Blatter, working on various matters related to football, such as the international football calendar. It was a full-time job," Platini said.

"This occurred because, at the time, FIFA informed me that they would not be able to pay me the total agreed amount."

Switzerland on Tuesday ordered the extradition of another fallen FIFA official and the world body's ethics committee ordered a life ban from football against former vice-president Jack Warner.

But South Korean tycoon Chung Mong-Joon, a rival candidate to Platini in the FIFA race, called for a task force to run FIFA because of the "total meltdown" at the world body.

He said FIFA should organize an "emergency congress" to set up the task force leadership.

"The most urgent task at hand is to root out corruption from within FIFA," he said. "Justice must be served."

FIFA has been in its worse crisis since U.S. prosecutors charged 14 FIFA officials and sports business executives in May over involvement in more than $150 million of bribes.
RELATED TOPICS