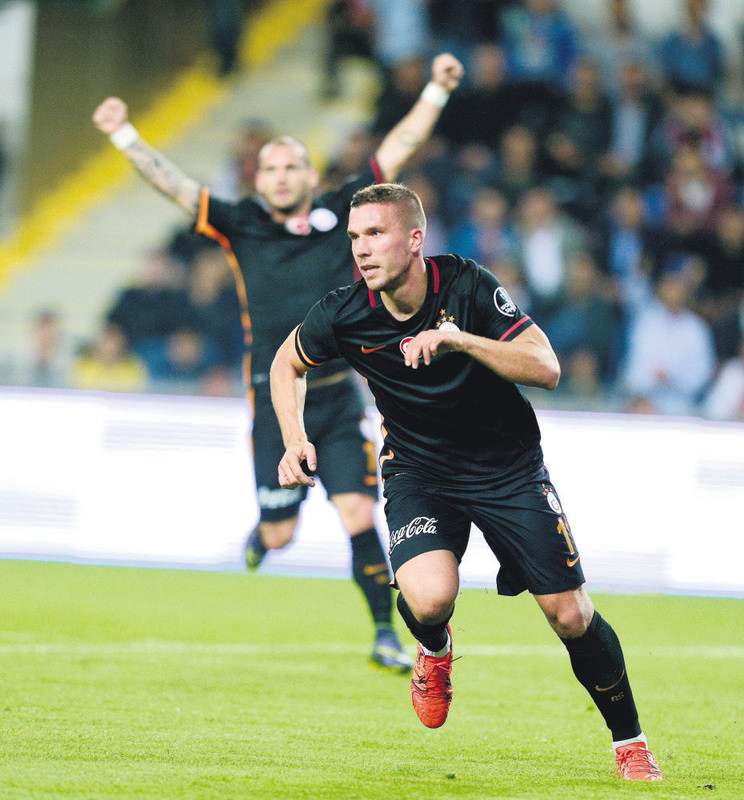 by Hakan Baş Oct 05, 2015 12:00 am
The Yellow-Reds did not come away with a win in the Champions League for the 10th consecutive match, but made it 3 for 3 in the Sport Toto Super League, winning the away match against Medipol Başakşehirspor 2-0 on Saturday night. Although they experienced a crisis following the humiliating draw against Kazakhstan's team Astana last week, Galatasaray earned three points with the goals of Lukas Podolski and Umut Bulut. As of Saturday night, they topped the league despite making one of the worst starts in team history.

On the objections of their rivals for the referee's not seeing the handball when Podolski scored the first goal, Galatasaray coach Hamza Hamzaoğlu said, "It's the decision of the referee. The ball hit Lukas' hand. If it happened to us, I would react too. However, the critics will never end and we will mind our own business."

Meanwhile Galatasaray's Dutch star Wesley Sneijder has received a two-year contract extension. Hamzaoğlu said, "Sneijder's staying at the club made me happy. We did not think any problem would occur anyway."

Medipol Başakşehir President Göksel Gümüşdağ made a statement after the discussions on the referees' poor performances over the last weeks. On the referee's decision for Lukas Podolski's position, he said, "I'm saying as a president who suffered from the referee's wrong decisions everybody must support the referees. I'm aware that our coach and players are annoyed with the decisions of the referee Serkan Tokat during the match against Galatasaray. He is a new and young referee."

"In recent weeks referees' performances have been very bad. Everybody knows that. However it is fact that we have to trust the Central Referee Board and the referees in our hand. I congratulate Hamzaoğlu. He said that the ball touched Podolski's hands. I thank him. These referees are ours."

"It would be absurd for us to import foreign referees considering we our country has 78 million people. This week, we will discuss in a meeting to be held by the Clubs Union and Turkish Football Federation how we can increase the performance and quality of our referees.Some club presidents give me calls on this matter. All of us must be supportive and constructive on this matter. I don't believe the referees are malevolent."
RELATED TOPICS