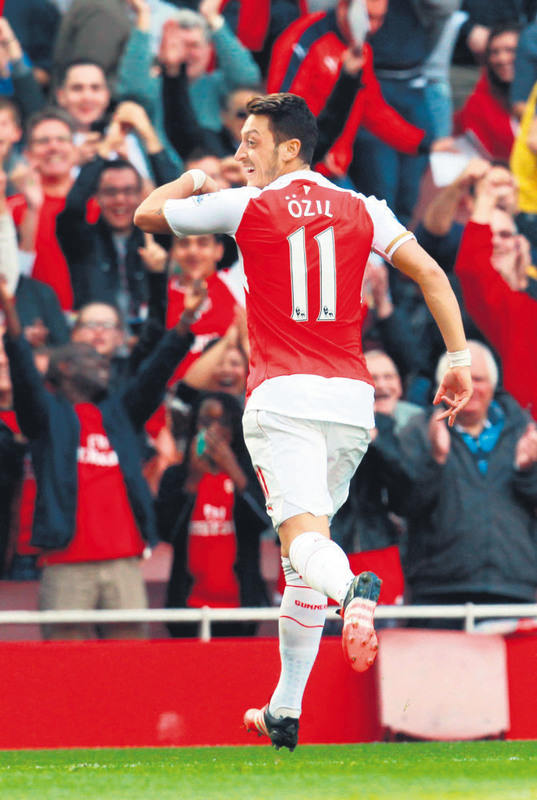 by Daily Sabah with Wires Oct 06, 2015 12:00 am
Arsenal and their Turkish-German star Mesut Özil have answered some of their critics after blowing Premier League title rivals Manchester United off the park in a resounding 3-0 victory. Alexis Sanchez scored Arsenal's first and third goals, a cheeky back-heel in the sixth minute followed by an 18-yard thunderbolt, with Theo Walcott teeing up Mesut Özil to slot home 74 seconds after the Chilean's opener.

At the start of Arsenal's Premier League fixture with Manchester United, Özil proved his doubters wrong with a spectacular performance. In just seven minutes, Özil had scored, assisted and completed 88 percent of his passes. Arsenal have kept four clean sheets, the second highest in the league, and are among the teams who have conceded the least goals so far this season. Former Barcelona winger Sanchez was forced off in the 81st minute after picking up a knock and manager Arsene Wenger confirmed it was not serious and that Sanchez will travel to play for Chile during the international break.

"He [Sanchez] has a little groin problem. Unfortunately he goes to Chile. You cannot stop him from going to Chile and he loves so much to play for his country," coach Arsene Wenger said.

"Hopefully he will come back in good shape." The 65-year-old Frenchman also heaped praise on forward Theo Walcott, who set up two of the three goals on Sunday.

"He [Walcott] did really fight today and showed he can fight, commit and protect the ball as well. He is gaining some aspects of his game as a center forward and they are improving," Wenger said.
RELATED TOPICS