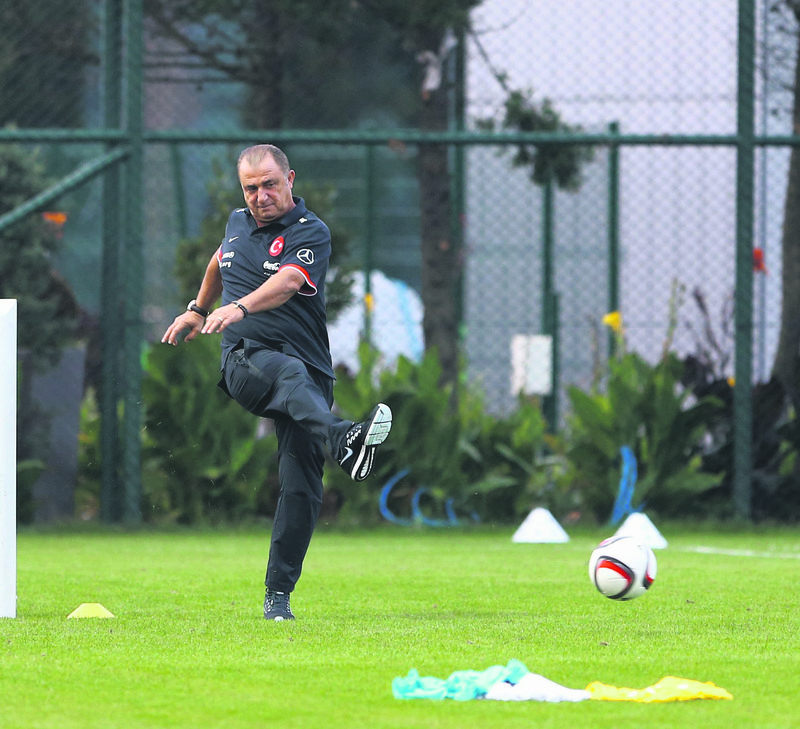 The iconic Turkish coach who earned Turkey its first and only European triumph, is now eyeing qualification for Euro 2016 in the last two matches against the Czech Republic and Iceland

Terim, who is in his third stint with the national team, will lead Turkey for the 115th time at the 2016 UEFA European Championship Qualification match against the Czech Republic on Saturday and for the 116th time against Iceland on Tuesday.

He made his debut as a manager for the national team on April 11, 1990 before being replaced by German coach Sepp Piontek. In his first match, against Denmark in Copenhagen, the Turkey were defeated 1-0. Following his one-match duty, Terim continued to coach the team between Oct. 27, 1993 and June 19, 1996. The veteran manager was appointed as the manager of the national team for his second term on Aug. 17, 2005 and continued his duty until Oct. 14, 2009. In the fall of 2013, Terim became the manager of the Turkish national team for the third time and took his place on the bench after 1,422 days away from the job in the match between Turkey and Andorra in Kayseri on Sept. 6. In 114 games Terim has led the Turkey to 59 wins, 29 draws and 28 defeats. The national team has scored 174 goals in these 114 matches, and conceded 123 goals.

As for the Euro 2016 group matches, Turkey need four more points to qualify for Euro 2016 after they defeated the Netherlands 3-0 last month. Ahead of the match against the Czech Republic, Turkey have 12 points and are ranked third in Group A. The Netherlands are in fourth rank with 10 points. If Turkey collect just four points in the two matches against the Czechs and Iceland, they will advance to the playoff stage regardless of the results in the other games.

Elsewhere, Serbia gained a measure of revenge on Thursday with a 2-0 win in Albania in a tense match held amid tight security, a year after the Belgrade fixture between the Balkan rivals was abandoned due to violence.

Stoppage-time goals from Aleksandar Kolarov and Adem Ljajic earned the visitors a satisfying Euro 2016 qualifying victory and denied their hosts a historic first ever place in a major finals.

Despite fears there might be trouble when the two sides meet again in the Albanian city of Elbasan, the match passed without problems, surrounded by a huge police presence.

In their match in Belgrade last October, Serbian fans hurled smoke bombs and invaded the pitch to attack Albanian players after a drone carrying a nationalist flag bearing a map of "Greater Albania" flew over the stadium. The incident escalated into a diplomatic row and highlighted the fragile ties between the two Balkan nations.

In July, the Court of Arbitration for Sport awarded a 3-0 win to Albania for the aborted game, deeming the Serbian FA responsible for it not being played in full.

The result meant Serbia could not get through to the European Championships, while Albania retained a chance of reaching a major tournament for the first time in their history.

Thursday's result leaves Albania third in Group I, a point behind Denmark, and needing a win in Armenia on Sunday to qualify, otherwise they will head to the last-chance play-offs.

Serbian goalkeeper Vladimir Stojkovic had said ahead of Thursday's clash that his team wanted to "spoil their plans" and prevent Albania from qualifying. The Serbian national anthem was booed at the start of the match, but no hostile slogans were reported during the 90 minutes.

Bilateral relations have traditionally been frosty, especially since Kosovo, a former province of Serbia populated by mostly ethnic Albanians, declared independence in 2008 - a move not recognized by Belgrade.

Meanwhile two Serbian footballers who are playing in Turkey, Fenerbahçe's Lazar Markovic and Beşiktaş's Dusko Tosic attracted anger from Turkish fans because of their actions during and after the matches against Albania. Tosic got the attention of supporters after he made a Chetnik salute after his goal. Beşiktaş fans harshly reacted to his celebration on social media. Beşiktaş fans now await Tosic's response. Tosic entered the match in the 65th minute and assisted Serbia's second goal. A kind of greeting among Serbian nationalists, Chetnik is a Serbian symbol of victory and has had a negative meaning since the Bosnian War. Fenerbahçe's Markovic who pulled out of the squad because of his injury shared a picture of a Serbian flag with "Kosovo belongs to Serbia" written on it on his social media account. This also angered Turkish fans.

Meanwhile, Germany coach Joachim Loew saw his world champions humbled 1-0 by the Republic of Ireland in Euro 2016 qualifying Thursday but blasted the home side for scoring from their "100th long ball." Shane Long's 70th-minute strike gave Ireland a first ever competitive victory over the Germans that guaranteed at least a playoff spot, and offers them a serious chance of automatic qualification for the finals in France next summer.

Germany's fate is in their own hands, with a home game against Georgia to come on Sunday and only one point required to reach the finals. "It was one of the most unnecessary defeats we have suffered in recent years," said Loew.

"It was to be expected that we would face nine or 10 players behind the ball and Ireland hitting long, hopeful balls. They only had one opportunity to score.

"We created loads of chances but wasted too many of them. Against opponents like this we need to score. We avoided 99 of those long balls but the 100th was one too many."

Ireland now travel to Warsaw on Sunday to face Poland knowing victory or a score draw of 2-2 or higher will clinch their place in the finals.