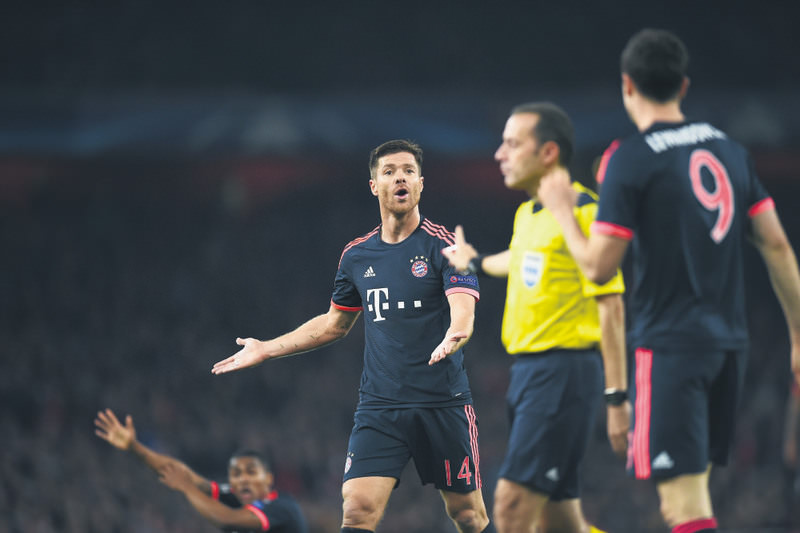 by daily sabah Oct 22, 2015 12:00 am
As Arsenal beat Bayern Munich 2-0 in the Champions League on Wednesday, the Gunners' German star Mesut Özil was seen mouthing the F-word in Turkish when speaking to Turkish referee Cüneyt Çakır. It was easily understood from Özil's lips that he used graphic language when voicing his displeasure about a decision. According to an analysis from the SportsMole website, it was "obvious" that Çakır did not deserve to be sworn at by Özil considering the decisions he made.

The website said: "Çakır kept the contest flowing by never taking too long over decisions as the match flowed at an enjoyable pace. His assistants were not performing at their best, though, with the official behind the goal somehow managing to miss the ball striking Olivier Giroud's hand when the Gunners broke the deadlock. The same official did well to spot the ball cross over the line when Özil doubled the lead, but Bayern will not be happy about the opener." As for the match, goals from Giroud and Özil helped Arsenal end a run of two consecutive defeats in the Champions League with their 2-0 victory over Bayern Munich. Arsenal knew that victory in at least one of its next two matches against Bayern would be vital for advancing from Group F, and it managed to inflict the first defeat of the season against Pep Guardiola's side.

The three points gained at Emirates Stadium puts Arsenal back in the hunt for qualification. Bayern is now level at six points with Olympiakos, who beat Dinamo Zagreb 1-0. Dinamo and fourth-place Arsenal have three points each. Meanwhile, hundreds of seats were left vacant in the Bayern supporters section for the first five minutes of the game, with two signs placed across the rows of seats, reading, "64 pounds a ticket but without fans football is not worth a penny."
RELATED TOPICS