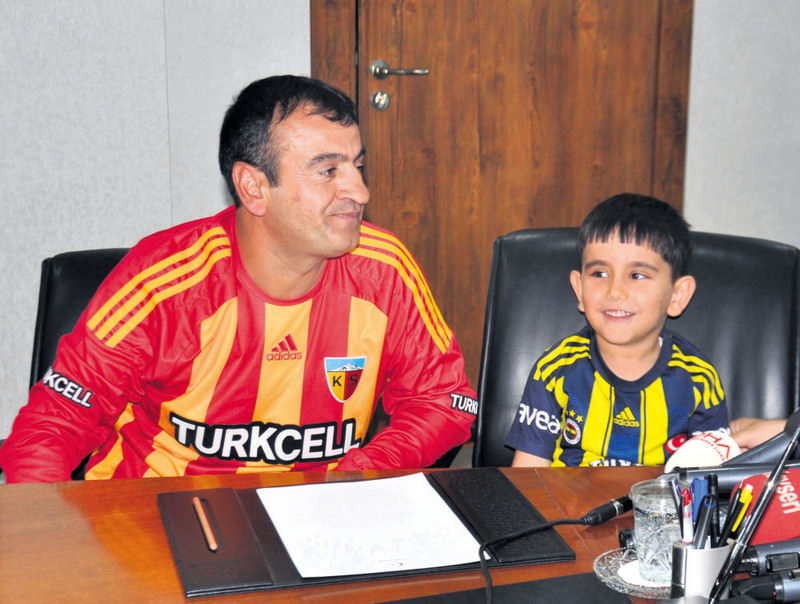 by daily sabah Oct 23, 2015 12:00 am
The Turkish football world has been talking a lot about a tragic incident that took place during the Spor Toto Super League match between Kayserispor and Fenerbahçe on Sunday in Kayseri. At Kayseri Kadir Has Stadium, Kayseri fan Recai Kahraman saw a boy wearing a Fenerbahçe jersey. Kahraman was displeased by this and wanted the boy kicked out of the stadium because he was wearing the rival's jersey. Upset by the rude behavior of Kahraman, the little boy, Berkay Çoban, began to cry and hug his father. The fan was restrained by those who were near the boy. But after the match Turkish viewers who watched the TV footage covering the incident reacted harshly toward the angered fan. They found this kind of behavior toward an innocent child intolerable and wanted the rude man to be punished. The clip went viral on social media site and the reaction snowballed. Authorities then started investigating the incident. The Turkish Football Federation has begun a legal process against Recai Kahraman and decided he should be suspended from attending league matches. The fan and the boy met at Kayseri Governor's office. Kahraman apologized to the boy. Berkay then slapped him on the cheek during the televised meeting. Fenerbahçe announced that they invited the little fan to watch Fenerbahçe play Galatasaray this weekend.

Moreover, Minister of Youth and Sports Akif Çağatay Kılıç announced that they will send Berkay Çoban to the Euro 2016 Championship in France. Kılıç paid a visit to Orhan Saka Sports Hall and evaluated the unfortunate incident. The minister spoke with the Turkish Football Federation to send the 4-year-old child to France as a guest. Kılıç said the incident that happened last weekend was very unfortunate. "Those who made this child cry displayed inhumane attitude and poor sportsmanship," he said. "We will closely follow the incident and are working on a legal response. I have also been in contact with the boy's father, Ramazan Çoban. Berkay's health is very good," he continued. Kılıç said that this incident should be condemned by the whole sports community. "I believe there isn't anyone in the sports community who accepts this behavior. We have another chance to show proper sportsmanship. There is a Fenerbahçe-Galatasaray match ahead of us. I believe both the fans and managers of the two teams will give a message of friendship, brotherhood and sportsmanship during the match," he concluded.
RELATED TOPICS